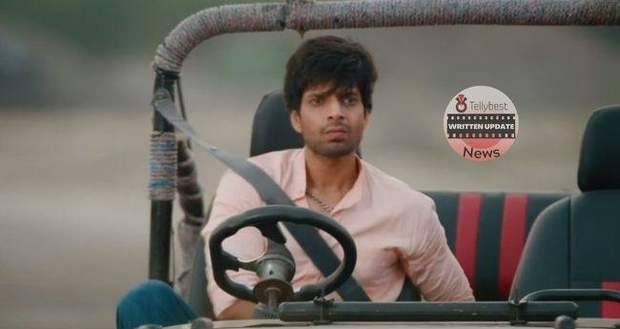 Today's Udaariyaan 12th October 2022 episode starts with Vineet and Shamsher driving away hurriedly while Ekam runs behind them.

Ekam concludes that an influential person is behind Nehmat’s kidnapping and his father's blackmailing.

In the car, Advait shows Malika’s photo to Shamsher and introduces her as his plan B.

Advait plans to use Malika as his information radio of Nehmat and Ekam's whereabouts.

On the other hand, seeing Nehmat going to college, Rupi advises Nehmat to preserve her dignity and maintain his trust in her.

Later, Nehmat urges Varun to have ice cream with her but he refuses as he is getting late.

At the same time, Nehmat sees Naaz with a man and steps down from the autorickshaw to meet Naaz but she is gone.

Meanwhile, Varun is walking angrily while Naaz follows him and apologises for making him late.

On the other hand, Nehmat sees Ekam entering his car but she recalls their conversation and ignores him.

Later, Nehmat is standing in the college parking lot while Ekam is waiting for her, and they run and hug each other.

The imagination breaks and Ekam sees Nehmat shivering in the cold so he gives her his shirt to her.

After reaching home, Nehmat kisses the shirt and leaves it in the autorickshaw and Ekam picks it up like a treasure.

The next morning, Nehmat asks Naaz about what's going on in her life and assures her that she is there for her.

However, Naaz goes away thinking that Nehmat is nosy and jealous of her relationship.

In a coffee shop, Advait flirts with Malika and unaware she blurts out everything about Nehmat and Ekam’s relationship.

Advait smirks as his decision of trapping Malika for Nehmat and Ekam’s information was correct.

Afterwards, Naaz and Varun sit down in a cafe and Varun forces her to drink his black coffee to prove that she loves him.

At the same time, Nehmat arrives and gets shocked seeing Varun with Naaz.

Later, Nehmat records Varun throwing his coffee on Naaz’s face and she grabs his collar angrily.

However, Naaz stops Nehmat while she threatens Varun that she will put his video on social media.

She raises her hand to punch Varun but Naaz stops her hand and declares that he is her boyfriend.

Naaz accuses Nehmat of being nosy and defends Varun’s actions saying that some coffee fell on her accidentally.

She orders Nehmat to apologise to him and stay out of her business.

Meanwhile, Varun’s ego gets hurt and says he will take revenge for the humiliation.

In Sandhu’s house, Naaz cries and tells everyone that Nehmat is controlling her life.

In Naaz’s room, Nehmat accuses Varun of brainwashing Naaz but she threatens her to shut up or else she will tell the family about her secret meetings with Ekam.

© Copyright tellybest.com, 2022, 2023. All Rights Reserved. Unauthorized use and/or duplication of any material from tellybest.com without written permission is strictly prohibited.
Cached Saved on: Monday 21st of November 2022 08:48:58 AMCached Disp on: Thursday 1st of December 2022 02:29:52 AM