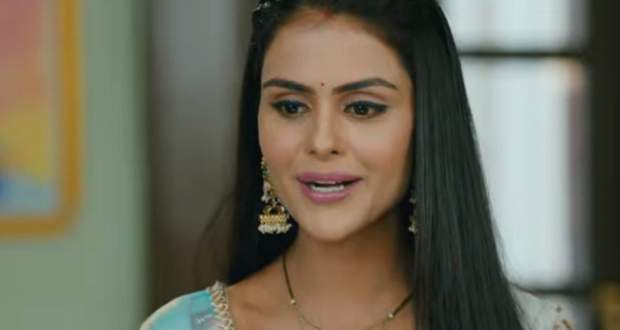 Today's Udaariyaan 13 August 2021 episode starts with Tejo and the family congratulating Fateh while Jasmin sees them stops from afar.

Jasmin gets angry saying that they were supposed to have a special date but he is celebrating with his family.

Tejo and Fateh cut the cake while Jasmin thinks to go in.

Meanwhile, Tejo calls Simran and shows her the party.

Jasmine picks the champagne while the family members get shocked seeing her.

Tejo cuts the call with Simran who gets upset seeing Fateh's picture.

Candy asks Simran why she is crying and she tells him that Fateh is an old friend.

Meanwhile, Tejo asks Fateh if he invited her and he denies after which the family starts rebuking her.

The family members ask her who invited her when Amrik lies that he invited her to the party.

Khushbeer scolds Jasmin while Gurpreet insults her and tells her to leave.

Jasmin looks at Fateh and thinks that he is silent while she is getting insulted.

Khushbeer is scolding Jasmin while Fateh stops which makes her happy.

However, Fateh tells Khushbeer that he doesn't care if Jasmin is there or not which upsets Jasmin and she leaves.

She cries and breaks the champagne bottle while Tejo goes after her and comforts her.

Jasmin tells her to go inside and enjoy as she doesn't want the Virk family to scold her.

Fateh tries to call and message Jasmin but she doesn't reply to him.

She reads the message and tells him to enjoy the party by answering his call.

Buzo takes him after which Khushbeer announces that Tejo and Fateh will go to Chndigarh for dinner and will stay at the hotel.

Fateh tries to make up excuses but Khushbeer says that he will handle the money and tells Amrik to book the tickets. Precap:

Jasmin forms a plan to stop Fateh from going with Tejo.