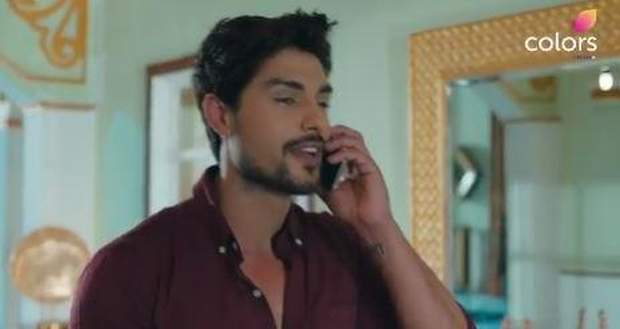 Today's Udaariyaan 13 July 2021 episode starts with Jasmin getting happy seeing Fateh standing still and thinks that he still loves her.

She reaches home and Mami scolds her asking if she went to meet Fateh.

Elsewhere, Fateh gives a gift to Tejo which confused her while he says that he doesn't need a reason to gift her wife something.

Tejo opens the gift to see Saree while Fateh imagines Jasmin opening the gift and getting happy.

Jasmin refuses to accept Mami's statement but Mami threatens to reveal the truth to her family that she is using Gippy to get close to Fateh.

Meanwhile, Fateh tends to Tejo's injury while talking about the relaunch party.

Tejo talks about Jasmin getting married while he gets uncomfortable and leaves.

The next morning, Tejo plans to go with Jasmin for shopping as her wedding is fixed as Mahi tells her to get Jasmin married immediately so that she doesn't bother them.

Everyone leaves as Jasmin comes to Tejo who invites her inside.

Jasmin makes an excuse of going to washroom and goes to Tejo's and Fateh's room.

Meanwhile, Tejo talks to Satti on call who adivses her to stay alert of Jasmin's intentions.

© Copyright tellybest.com, 2020, 2021. All Rights Reserved. Unauthorized use and/or duplication of any material from tellybest.com without written permission is strictly prohibited.
Cached Saved on: Wednesday 22nd of September 2021 11:43:05 PM