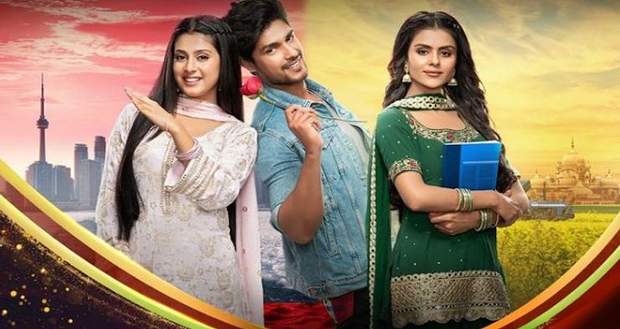 Jasmin drops the shirt and leaves the bathroom in a hurry.

She acts sweet with Tejo and tells her that she really wants to see her and Fateh together.

Further, Jasmin goes outside and talks to Amrik while making it seem that she is marrying Gippy so that Tejo and Fateh can live happily.

Later, Fateh comes home and Amrik argues with him saying that the real reason for Jasmin marrying is so that Tejo and he can live happily.

After goes to the bathroom to calm himself where he sees his shirt misplaced.

He smells Jasmin's perfume on it and throws it into the drawers remembering her leaving the Mandap.

He gets emotional and unblocks Jasmin to read the text she had sent him earlier.

Jasmin gets happy receiving the notification that Fateh unblocked him while he again blocks her.

He comes to the market to pick up Tejo where he gets jittery seeing Jasmin.

Tejo talks excitedly about bangles inside the car but Fateh focuses on Jasmin and Gippy hugging.