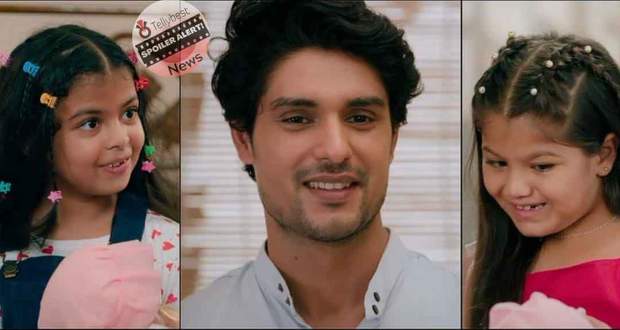 Today's Udaariyaan 14th September 2022 episode starts with Rupi surprising Naaz with a cycle as an advance birthday gift but Naaz gets scared of Jasmine scolding her.

Meanwhile, Fatejo assures Naaz and she gets happy thinking she just needs to act like a victim to get anything she wants.

At school, Naaz boasts about her cycle to Nehmat and plans to play with her at her home but Malika gets jealous of Naaz and exclaims she hates Nehmat.

Later, Naaz meets Fateh and lies to him about Nehmat leaving her alone and demands to take her cycle back as Nehmat has gotten jealous of her new cycle.

After going home, Naaz eavesdrops on the loud voices coming from Shelly’s room.

However, her husband exclaims that Jasmine left Nehmat in Fatejo's lap after giving birth to her 6 years ago.

Hearing Shelly’s words, Naaz's heart breaks as she blames Jasmine for leaving Naaz to such a wealthy family while keeping her with Yash’s mother.

Elsewhere, Jasmine is sitting in a basement while holding Naaz's photo and apologising to her.

In Virk's house, Tejo and Fateh are talking about Naaz's insecurities and decide to adopt Naaz to reduce her insecurities.

In Naaz’s room, Naaz is crying and blaming Jasmine for leaving her in Bad Dadi and Papa’s house.

In Nehmat’s room, Fatejo sees Nehmat excitedly preparing to teach Naaz cycling while Tejo decides to not ask Nehmat about adopting Naaz as she has already taken up the role of big sister.

However, Fateh expresses his worry about Nehmat becoming the next Tejo but she assures him that Nehmat is a brave girl.

The next morning, Fatejo, Nehmat, Naaz and Sati meet in the park with their cycle while Naaz is glaring at Nehmat.

Seeing Naaz sad Fateh tries to cheer her up by teaching her to cycle.

On the other hand, Nehmat shares her precious moments spent with Fatejo while Naaz gets jealous of seeing Fatejo and Nehmat feeding each other ice cream.

Nehmat calls Naaz to join them but her ice cream falls down.

Later, Naaz runs after lying and pushes the cycle agitated with jealousy and breaks the cycle by smashing a brick on the cycle continuously.

At the same time, Fateh tells Nehmat that he is proud of her for taking good care of Naaz.