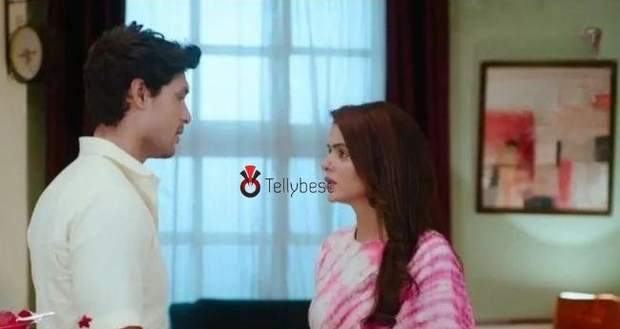 Today's Udaariyaan 15th August 2022 episode starts with Jasmine asking Tejo not to interfere in others’ matters and focus on her own life.

Tejo warns Jasmine that she will not sit idly if she notices that Jasmine is bringing up any trouble and will answer her in her way.

Meanwhile, Fateh proposes a deal to Amanpreet that they will give him 20 lacs if he decides to leave Candy alone.

Amanpreet refuses Fateh’s offer and mocks him for not being able to become a father.

Telling Fateh how precious the bond between a father and son is, Amanpreet laughs by himself while Fateh leaves in anger.

Elsewhere, Jasmine tells Gurpreet that she feels that Tejo is a bit jealous of her because she cannot become a mother herself.

Tejo overhears the conversation and decides to teach Jasmine a lesson for trying to manipulate Gurpreet in such a manner.

After Nimmo and Gurpreet notice Jasmine’s swollen feet, Tejo proposes to do acupuncture as a treatment with the help of needles.

Jasmine gets scared of seeing the needle but endures it silently as Gurpreet and Nimmo persuade her to do it.

Later, Yash comes to meet Jasmine and gifts her flowers while greeting her.

Jasmine tells Yash that she cannot marry him until the baby comes into the world as she has to give them to the family members.

Yash tells Jasmine that he will wait for her and shows her their future house in Canada.

However, as Jasmine leaves, Yash informs someone on the phone that Jasmine is ready to marry him according to the plan but she will see her worst nightmare in Canada.

Tejo and Fateh discuss Amanpreet after Fateh informs Tejo that he refused to take the money.

Later, at the college, Tejo slaps Amanpreet in front of local bystanders as he was being impolite and flirtatious with her.

The whole family decides to celebrate Janmashtami together and Tejo prepares everything the next day.

Amanpreet decides to take revenge on Tejo for humiliating him and sends men to kidnap Fateh.

While fighting with the goons, a man hits Fateh on his head which makes him faint and Amanpreet succeeds in kidnapping him.

Meanwhile, a small fire happens during the preparation of the puja by Tejo which looks like a bad sign for the future.

© Copyright tellybest.com, 2020, 2021. All Rights Reserved. Unauthorized use and/or duplication of any material from tellybest.com without written permission is strictly prohibited.
Cached Saved on: Saturday 1st of October 2022 10:14:25 PMCached Disp on: Thursday 6th of October 2022 05:06:16 PM