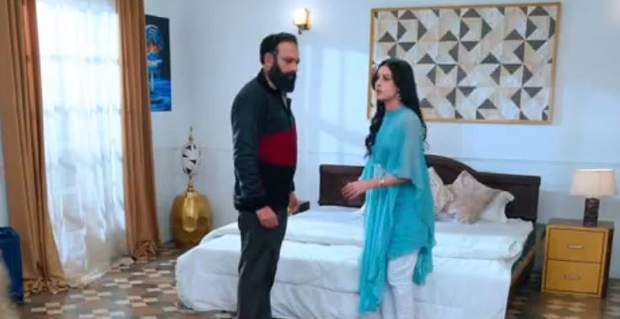 After Khushbeer leaves, people tell Fateh that Khushbeer apologized for not being able to gather funds to build a school he had promised of.

Later, at home, Fateh says they can find a good groom for Simran through the marriage bureau. Khushbeer agrees with him.

The next day, a family comes to meet the Virk family for Simran's marriage.

When the Virks find out that the groom is double Simran's age, Khushbeer refuses to marry Simran to him.

Khushbeer asks the family to leave after which Fateh tries to explain to him that no young guy will agree to marry Simran.

Understanding the situation, Khushbeer says he'll wait for a nice guy and until then he won't get Simran married.

Further, Fateh comes to Tejo waiting outside Virks' house, and thanks her for her plan.

Later, the marriage bureau manager shows profiles of different men for Simran but Khushbeer rejects them all.

The manager tells Khushbeer that there is a guy who will agree to the marriage but she needs to talk to his family. Khushbeer asks her to invite the family to his house and he'll talk to them.

Simran is happy as the family visiting is Buzzo family.

Meanwhile, Tejo sees Buzzo preparing to meet Khushbeer and others and hopes that everything goes well.

In the meantime, Jasmine gets a man out of the jail and takes him with her.

Further, when she walks into the room where the man is, she sees Amrik shivering with fear.

Upcoming Udariya episode updates: Buzzo and Simran's family get into an argument.