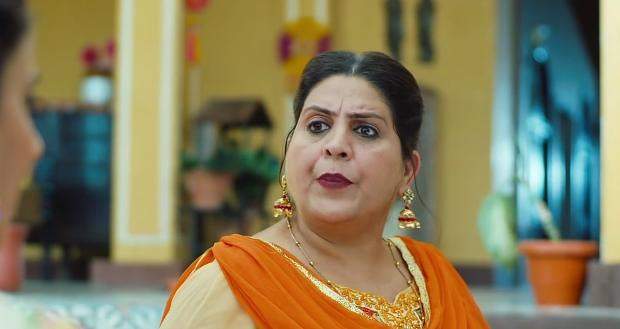 Today's Udaariyaan 16 July 2021 episode starts with Fateh working out and thinking of Jasmin while Buzo tried to talk to him.

Meanwhile, Jasmin learns that Mami has gone to meet Tejo and gets tensed thinking that Mami might reveal the truth to Tejo.

Fateh tries to get Jasmin out of his mind while Mami reveals to Tejo that Jasmin is just using Gippy to get Fateh and warns her to be careful of her.

However, Tejo doesn't believe her saying that her sister can't plot against her to which Mami reveals Jasmin's behaviour when she was at her home.

Jasmin calls Tejo to find out if Mami is there but doesn't get a response.

Tejo tells Mami that she isn't worried as Fateh is with her and tells her to get Jasmin married to Gippy.

Elsewhere, Fateh talks to Buzo and tells him that he is going crazy about Jasmin.

Buzo advises Fateh to go to Tejo and talk to her about his problems but Fateh hesitates.

Fateh says that he is going to block Jasmin from his mind as Buzo also encourages him.

She calls Jasmin and asks her if everything is okay.

However, Jasmin manages to manipulate the situation and ends the call while Sweety praises her for being cunning.

Fateh returns home while Tejo gives him tea and bumps into Mahi as she admits Fateh.

Mahi teases her after which she leaves.

Later, at college, Tejo imagines Fateh complimenting her as she wears the saree gifted by him and spending romantic time with him.