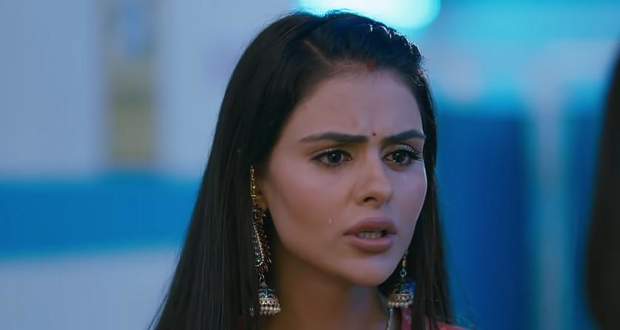 Today's Udaariyaan 18 August 2021 episode starts with Fateh seeing the students playing cards and scolds them while Tejo comes there.

He gets angry at the student Aman and slaps him and Aman leaves with a threat while Tejo tells Fateh to calm down.

Later, Jasmin feeds Fateh and clams him while he throws the phone seeing Tejo's incoming call.

Tejo goes to her class when suddenly Aman locks the door and fires in the air.

He rebukes Fateh and tells Tejo to call him there while a girl student records everything.

Dilraj shows his family the video of Tejo being tied up which makes the family worry for her.

Fateh feels worried and thinks to call family but Jasmin stops him.

Aman orders the students to keep their phones down while Jasmin ignores Satti's incoming calls.

Tejo gets calls from her family and Buzo and she manages to convince Aman to let her speak to him.

Buzo tells her that Khushbeer has spoken to police Aman tells Tejo to tell them to not bring police if they want everyone alive.

Fateh checks his phone and gets worried seeing the missed calls and gets even more shocked seeing the video of Aman threatening Tejo.

Fateh talks to Aman through Tejo's phone and rushes there while Jasmin also finds out about it and rushes towards the college.

The family is also on their way while Fateh recalls his fight with Tejo.

© Copyright tellybest.com, 2020, 2021. All Rights Reserved. Unauthorized use and/or duplication of any material from tellybest.com without written permission is strictly prohibited.
Cached Saved on: Monday 1st of August 2022 12:05:36 PMCached Disp on: Thursday 11th of August 2022 04:57:55 AM