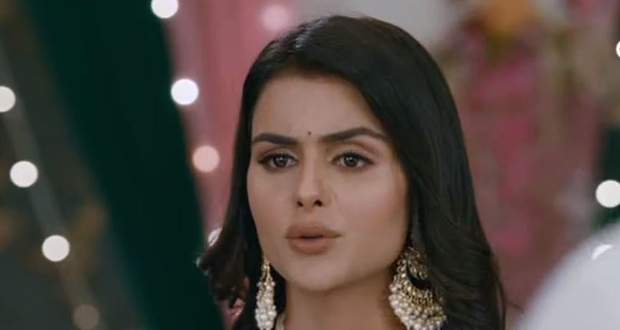 Today's Udaariyaan 18 September 2021 episode starts with Jasmin telling everyone that Tejo is framing her and that she didn't do anything while Fateh also supports her.

She questions Tejo why she is there even after the divorce and argues with her which singers Tejo and she brings the divorce papers and tears them into pieces in front of her.

She says that now she won't give divorce and will stay in the Virk house only while the family members support her making Fateh and Jasmin angry.

Later, Fateh asks Jasmin to tell the truth and she still lies to him that she didn't do anything and that Tejo is framing her.

Elsewhere, Gurpreet tells Dadi that Jasmin is trapping Fateh with her words and forms a plan with Mahi to make Fateh sees Jasmin's truth.

Fateh says that Tejo can't do it and Jasmin makes him exit the room thinking that she has to make Fateh believe that Tejo did this.

The next day, Fateh sees the parcel boy with a rat cage with Tejo while she tells him that it is not their parcel.

Tejo leaves while Fateh questions the parcel boy who informs him that Tejo had ordered the dead rats making Fateh believe Jasmin's words.

He goes to confront Tejo but sees her with Biji and doesn't say anything while Fateh gets frustrated seeing him silent.

Later, Gurpreet and Nimmo leave while Biji tells Mahi to proceed with their plan and Fateh's friends come to meet him.

Tejo is about to cook snacks for them while Mahi stops her and Biji tells Jasmin to cook for Fateh's friends.

Jasmin makes a mess in the kitchen and Mahi taunts her while taking a few fritters for Biji.

Biji tastes them and spits them out saying that it has too much salt and chili in it.

Just then, Dadaji and Khushbeer come house with some people.

Jasmin serves the fritters to Fateh and his friends while he tells her to take care of Khushbeer's friends and serve them too.

Fateh and his friend eat the fritters and keep them aside while he thinks if Jasmin served the same thing to Khushbeer and his friends.

© Copyright tellybest.com, 2020, 2021. All Rights Reserved. Unauthorized use and/or duplication of any material from tellybest.com without written permission is strictly prohibited.
Cached Saved on: Wednesday 13th of October 2021 02:23:36 PMCached Disp on: Thursday 21st of October 2021 08:45:58 PM