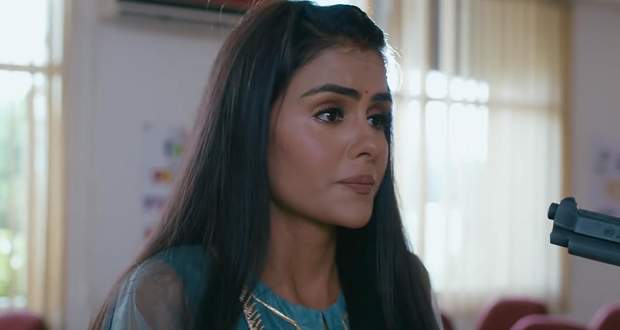 Today's Udaariyaan 19 August 2021 episode starts with Aman holding a girl hostage while Tejo convinces him to let her go as she has an asthma attack.

The police arrives and tells Aman to surrender but he tells them to go while Fateh reaches there.

Jasmin also reaches there as everyone holds back Fateh from entering.

Fateh jumps inside the classroom while Aman loads the gun and points it towards Tejo.

She calmly talks to him and tries to convince to put down the gun when the police walks in.

Fateh gets worried and takes an unconscious Tejo to hospital.

Later, doctor informs them that the bullet just grazed past Tejo's hand and that she's unconscious due to trauma.

Fateh goes inside and cries seeing her while she calms him.

He brings her home and the family gets happy while Jasmin also comes there.

Khushbeer stops Gurpreet while Jasmin goes to Tejo and cries.

At night, Jasmin messages Fateh to call her but doesn't get any reply.

Fateh feeds Tejo and tends to her while the glass breaks and he injures his hand.

Tejo gets worried but Fateh tells her to not care for him feeling guilty.

They both hug and patch up while Jasmin fears that they might get closer again.