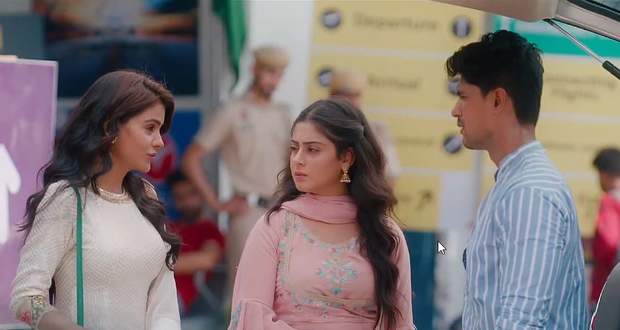 Today's Udaariyaan 19th May 2022 episode starts with everyone being shocked after Ruppi refuses to believe that it is Tejo.

Ruppi says that his dear daughter would never let her family be in pain with the grief of losing her.

Seeing everyone is delighted to see Tejo alive, Jasmine thinks that there is something special about Tejo as everyone is pouring their hearts out for a duplicate Tejo but they aren't looking at their own daughter Jasmine standing there.

At the same time, Gurpreet realizes that Amrik has not stepped into the house.

Gurpreet stands at the door calling out for Amrik.

Further, Fateh kneels down in front of Gurpreet and confronts that Amrik is no more because of which Gurpreet slaps Fateh for talking nonsense.

Khushbeer sits frozen on the couch while Gurpreet faints in shock.

After the doctor's visit, Gurpreet asks Fateh what happened to Amrik.

Fateh narrates everything that happened in London.

Further, Fateh says that Tejo doubted him for her murder but it turned out that the real killer was Angad.

Finally, when Angad confessed his crime and fired a bullet on Tejo, Amrik took the bullet on himself and lost his life.

Tejo consoles Gurpreet while everyone is still in shock.

As expected, Gurpreet is furious with Jasmine for taking Amrik to London.

Later, Gurpreet requests Tejo to stay there for the night, and the Sandhus agree to let Tejo stay.

During the pooja for Amrik, Fateh scolds Tanya as she says something wrong in front of Biji.

Further, Tanya shows attitude and reminds Fateh that she is not Tejo.

However, Fateh tells her that he has lost his brother because of her and she cannot expect soft behavior from him.