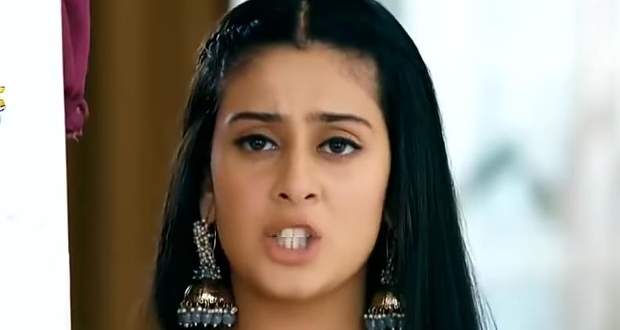 Today's Udaariyaan 1 November 2021 episode starts with Tejo calling Seher and Thapki and inviting them to the party while Jasmin acts of crying and tells Fateh that his family is making him feel ignored.

She requests him to let her handle the entertainment for the party and he agreed after much reluctance.

Just then, Jasmin gets a call from Jass who is in jail, and threatens to expose her to Fateh if she doesn't get him out of there.

Later, Jasmin meets Jass in jail and tells him to escape saying that she has gotten him bailed with much hard work.

Jass funds out that the party is happening at the paradise farmhouse and thinks to expose Jasmin in front of everyone there.

Fateh and Tejo have a sweet moment as he tells her to go change while he handles everything else.

Meanwhile, Jass' bike breaks down in the middle of the road while Angad likes his costume and offers to give him a ride to the venue.

They reach the venue and Jass blends in while Angad greets Fateh and informs him about giving a ride to one of his close friends.

Elsewhere, Jasmin walks in with Sweety when she bumps into Angad and behaves rudely with him while he brushes it off and leaves.

Later, Tejo and a dancer a performing while Jasmin goes behind the stage and throws marbles on the stage which makes the dancer fall.

Fateh is about to go on the stage to dance with Tejo when Angad reaches her first and dances with her.

Angad flirts with Tejo and she laughs with him while Jasmin learns that he is Angad Maan and the host of the party which makes her worried.

Virk's family and Sandhu's family make her entry and Angad gets impressed while Fateh gets jealous seeing him and Tejo laughing together.

Gurpreet gifts Tejo a necklace and she reluctantly takes it while Jasmin sees it and burns in jealousy.

Further, all the celebrity guests perform and have a good time.

Jass is about to go after Tejo when he notices Angad coming towards him and storms away from there and gets noticed by Jasmin who worries that he might reveal her true self.

Jasmin looks through guests to find Jass and feels relieved thinking that it was just her imagination.

Later, Jasmin dances with Fateh and proposes to him on stage with the ring but he leaves from there leaving her embarrassed.

All the ladies dance and Jasmin challenges Tejo who accepts and engages in the dance battle.

Meanwhile, Jass manages to break out of the room as Fateh joins Jasmin and Angad joins Tejo leading to Tejo winning.

Fateh tries to calm Jasmin while she blames him for losing.

Tejo sees someone covering the place with petrol and questions him while she gets shocked seeing Jass.

© Copyright tellybest.com, 2020, 2021. All Rights Reserved. Unauthorized use and/or duplication of any material from tellybest.com without written permission is strictly prohibited.
Cached Saved on: Wednesday 19th of January 2022 02:22:48 PM