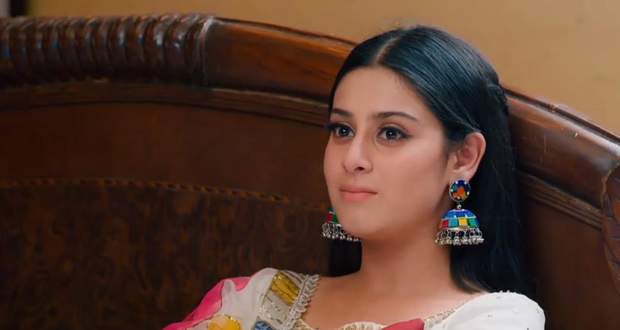 Just then, Fateh and Tejo come there and Tejo takes him to sit in front of the Babaji and asks when they will get married.

However, the Babaji stays silent which worries everyone.

Back at the Sandhu house, the Babaji tells them to enjoy the present as they might not get what they hope for in the future.

Meanwhile, Simmi tells the family what would happen if Fateh marries Tejo while Gurpreet angrily says that she will die before that happens and leaves.

Fateh tells Babaji that he won't let anything happen to his and Tejo's relationship as he has got her after many hardships.

Later at night, Tejo has a nightmare that she's searching for Fateh and a girl is following her which scares her.

She wakes her and keeps asking for Fateh while Satti tries to calm her.

Elsewhere, Fateh suddenly wakes up and wonders why he feels worried for some reason.

Back at the Sandhu house, Tejo destroys the room and creates a commotion that wakes up the whole family.

The family tries to calm her while Jasmine calls Gurpreet and makes her hear the commotion while lying that she accidentally called her instead of Fateh.

Fateh video calls Satti and tries to calm Tejo who keeps banging the vase and tells him to come there.

Fateh gets up to go to the Sandhu house while Gurpreet stops him and tells him to focus on his match that is happening the next day.

Gurpreet pressures Fateh to marry Jasmine while he says that Tejo needs him more and goes to Sandhu's house.

Later, Fateh calms Tejo while she demands him to sleep with him while he forms an idea and puts her to sleep without having to sleep beside her.

© Copyright tellybest.com, 2020, 2021. All Rights Reserved. Unauthorized use and/or duplication of any material from tellybest.com without written permission is strictly prohibited.
Cached Saved on: Sunday 2nd of October 2022 12:22:49 AM