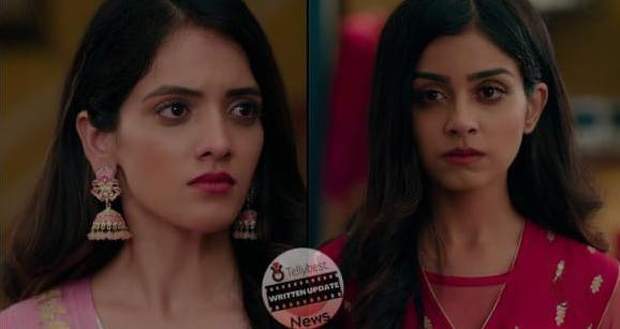 On the other hand, Ekam calms down and gets a call from his superior who informs him about his posting being shifted from Moga to Rajpura.

Ekam calls Nehmat but she is in the bathroom so he texts her to meet him at 6.

Meanwhile, Naaz deletes the message and Ekam’s miss call because she wants to refrain them from making up.

Later, Nehmat comes out and sends a message of breakup to Ekam but Naaz has put her phone on flight mode so the message does not go through.

Afterwards, Ekam is waiting for Nehmat while she gets a job letter from a media company.

Nehmat tells everyone the good news and she calls Nehmat but the call does not go through.

Ekam calls Naaz to ask about Nehmat’s whereabouts but she lies to him.

He requests her to tell him about his posting to Nehmat as he cannot contact her in the base camp.

Ekam leaves for his posting reluctantly while Nehmat and he are recalling their precious moments.

In Rajpura, Ekam goes on a secret mission and admires his and Nehmat’s picture and kisses the picture.

Meanwhile, Nehmat misses Ekam as his lucky charm is not there to wish her luck on her first day at the job.

At the same time, Naaz comes to give Nehmat her laptop and sees Advait’s picture on the posters.

Naaz watches the conference while Nehmat asks Advait about women's safety and accuses them of not taking appropriate actions.

She points out many problems while Advait gets overwhelmed and looks at his men for not bribing her media company.

Advait goes away hurriedly while Naaz falls in love with his status and finds out he has a brother named Nikhil.

On the other hand, Ekam leads his team into the enemy's camp and has a face-off with them.

In the Moga, Nehmat falls in Advait’s arms when a stranger crashes into her and Naaz clicks their picture.

Naaz thinks that she will break Nehmat and Malika’s pride by their true colours.

In the enemy camp, Ekam and his team are fighting the enemies but suddenly he gets shot by one of the enemy's bullets.

© Copyright tellybest.com, 2022, 2023. All Rights Reserved. Unauthorized use and/or duplication of any material from tellybest.com without written permission is strictly prohibited.
Cached Saved on: Monday 21st of November 2022 02:03:16 AMCached Disp on: Saturday 10th of December 2022 03:32:48 PM