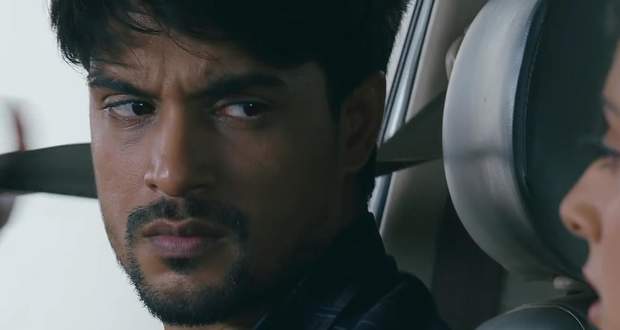 Today's Udaariyaan 23 August 2021 episode starts with Fateh removed jg the seat belt seeing the oncoming truck and speeding towards it.

Jasmin also removes her seat belt and sits calmly while Fateh pulls the car aside and hugs her.

Jasmin tells him that she loves him hugs him back.

The next morning, Fateh tells Tejo that he will drop her while she remembers plans meeting Simrwn and refuses saying that she'll go with the driver.

They both get call as Fateh lies to Tejo that Sameer is his college friend who lives in Delhi while Tejo lies that Urvashi is a fellow lecturer.

Tejo makes plans with Simran for lunch and leaves informing Fateh while he goes to meet Jasmin.

Later, Jasmin argues with Fateh that she left her dreams for him while he tells her to think about Tejo who has fallen in love with him.

Elsewhere, Tejo is with Buzo and tries to convince him to reveal his relationship with Simran to the family.

Jasmin advises Fateh that they should run away and tells him to choose what to do.

Nimmo and Gurpreet get doubtful seeing Tejo and Buzo together and question Tejo upon reaching home.

Gurpreet asks Tejo if she had gone to Gurudwara alone and Tejo says that she went alone making Gurpreet think that she is lying.

Nimmo informs about it to Amrik who tells her that Tejo might be helping Buzo with something.

Later, at college, Tejo again feels dizzy while Neha advises her that it might be a good news and tells her to confirm while giving her a pregnancy test kit.

Tejo goes to the bathroom and comes out smiling while telling Jasmin that she is going be an aunt soon.