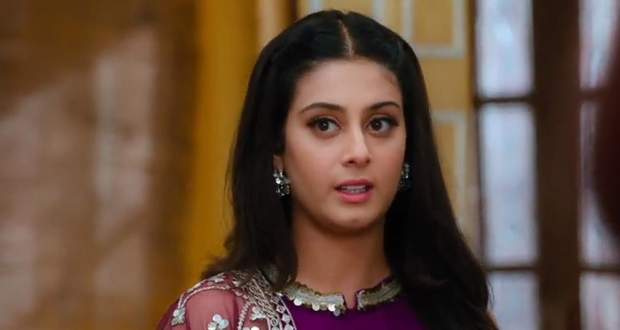 Meanwhile, Jasmine notices that Sweety's brother is covering the football match and calls her to inform his brother to focus on Tejo and Fateh.

Later, Fateh makes a score and Jasmine says that her Fateh made a score.

Tejo gets angry and pushes her saying get Fateh is not hers while the trustee sees the interaction and feels uneasy.

Jasmine forms a plan and tells Tejo that she will go and bring popcorn.

Back at the Sandhu house, Satti gets worried about how the public will react to Tejo's behavior.

However, Rupy tells her that society will have to love this Tejo too and that they have to teach Tejo how to face society.

Meanwhile, Jasmine spreads gossip about Tejo and goes back to her designated place.

The match reaches halftime and Tejo tells Fateh that they will go to get the trophy.

However, Fateh tells her that the match hasn't ended yet.

Further, Jasmine instigates Tejo who creates a scene that is shown live to the public.

Gurpreet tries to convince Khushbeer to convince Fateh to move on from Tejo and marry Jasmine but he leaves saying that it is Fateh's decision only.

Back at the college, Jasmine signals one of the players from the opposing team and he intentionally collides with Fateh.

Jasmine further tells Tejo that the player is intentionally hitting Fateh and sends her to the ground.

Tejo bites the security guard and goes past him after which she starts attacking the player who collided with Fateh.

Fateh rushed to Tejo and calms her while the families see everything live and feel furious and worried for Tejo.

A player calls Tejo crazy and Fateh fights with him due to which his team gets disqualified.

Fateh leaves from there with the media reporters surrounding him while the principal shames Fateh for humiliating the college.

Later, Jasmine acts like she doesn't know anything and says that she went to being ice cream for Tejo.

Just then, Fateh is called into the principal's office.

The principal tries to side with Fateh while the trustees say that there will be action taken against him.