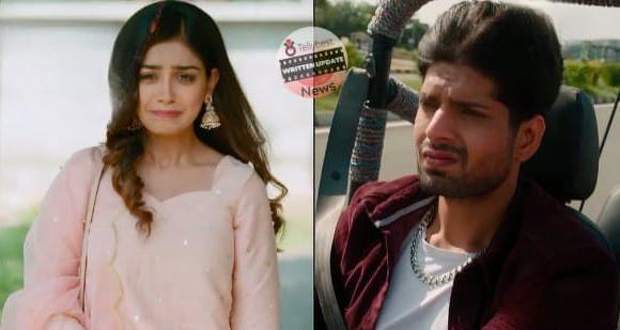 Today's Udaariyaan 24th October 2022 episode starts with Ekam getting shot in the arm as he recalls his moments with Nehmat.

Further, he seems to get courage from it and manages to tackle all of the terrorists.

On the other hand, Nehmat meets up with Malika who tells her that she's happy Naaz isn't there with them.

Nehmat tries to defend her sister when Malika reminds her how Naaz had challenged her.

Nehmat tells Malika to forget everything as Naaz has already apologized for her mistakes.

Not wanting to waste time on Naaz's talks, Malika starts gushing about the gifts that Advait has given her.

Meanwhile, Naaz is spying on Advait as she sits at the table nearby his table at the cafe and goes up to the counter once she hears his name being called.

She intentionally takes his drink and acts as if it was an accident while introducing herself to him once again.

Back in Nehmat's room, she reveals to Malika how Ekam hasn't replied to her calls which is worrying her.

Away from Nehmat, Ekam gets praised by his senior who tells him that he hopes for a speedy recovery.

Ekam asks another police officer about his phone and the officer informs him that all the data will be erased from the phone.

Ekam gets upset thinking that he will not be able to see or hear any message that Nehmat might have sent him.

On the other hand, Naaz follows Advait and gets shocked to learn that he has given a contract to kill Ekam to keep him and Nehmat away from each other.

She also hears him talking to his friend, Naman about meeting at the lighthouse club for a couples night.

Apart from all of this, Nehmat gets called into the office and the owner berates her for insulting Advait with her questioning and shifting her to digital media from live reporting.

Later, Naaz meets up with Nehmat and tries to convince her to come to the lighthouse club with her.

Nehmat recalls her pizza date with Ekam at the lighthouse club and agrees to go to the club with Naaz.

At the same time, Advait calls Nikhil and also invites him to the club for the party.

The evening arrives and Nehmat and Naaz reach the lighthouse club with different things on their mind.

Nehmat keeps thinking about Ekam while Naaz tries to get Advait's attention for her plan.

At the police station, Ekam recalls his date with Nehmat seeing the pizza when his eyes fall on a man inside the cell.

The officer informs him that the man is accused of killing his wife and the man whom she was having an affair with but isn't confessing.

Ekam asks for permission to question the man and goes inside the cell to talk to him.

Back at the club, Advait's friends ask him about his girlfriend he tells them that he has to care since he's in the political area now and also because his girlfriend is not well.

Naaz hears this and smirks as she recalls bribing Malika's make-up articles to use make-up take will cause her rashes.

Advait goes to the bar while Naaz also goes there and starts making small talk with him.

He asks her to dance but she lies that she's not single and tells him to dance with her sister who is going through a rough breakup.

Advait walks up to Nehmat and asks her for a round on the dance floor but she hesitates as she thinks about Ekam.

© Copyright tellybest.com, 2022, 2023. All Rights Reserved. Unauthorized use and/or duplication of any material from tellybest.com without written permission is strictly prohibited.
Cached Saved on: Monday 21st of November 2022 10:13:38 AMCached Disp on: Wednesday 7th of December 2022 03:23:57 PM