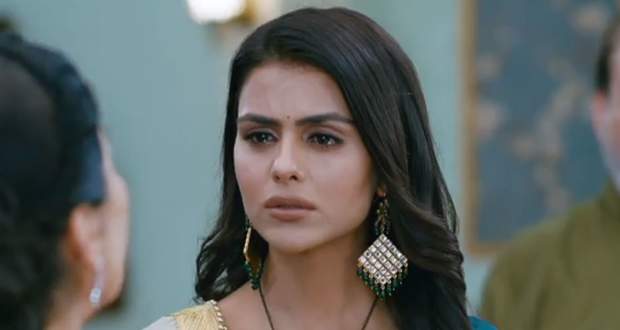 The next day, Simran calls Tejo and tells her not to go to the college today as the news about Fateh's 2 wives is spread everywhere like a fire.

Everyone sees this news and gets upset. When Jasmine comes to know about it she says that she doesn't care about all this news. Fateh feels bad about it but doesn't say anything.

Later, Khushbeer sarcastically congratulates Fateh on making everyone proud with his doings. Gurpreet thinks that she has to do something about all this. So, she goes to Tejo's parent's house and requests them to bring Tejo back to their house.

On the other hand, the sports minister tells that Khushbeer's son has done a very shameful act. Therefore, Khushbeer won't be given a ticket for MLA anymore.

Khushbeer comes home and tells Fateh that his pride, Fateh has made him ashamed.

Further, Gurpreet tells Tejo that she is not at mistake instead they are at fault. Gurpreet requests Tejo to leave the house respecting Gurpreet's words as her mother's.

Khushbeer tells everyone that he knows who is playing tricks. He also says any plans to remove Tejo from this house won't be fulfilled until Khushbeer is alive.

Later, Fateh overhears Tejo consoling his grandparents who are disturbed by all that's happening.

© Copyright tellybest.com, 2020, 2021. All Rights Reserved. Unauthorized use and/or duplication of any material from tellybest.com without written permission is strictly prohibited.
Cached Saved on: Tuesday 2nd of August 2022 07:09:19 AMCached Disp on: Thursday 11th of August 2022 05:46:57 AM