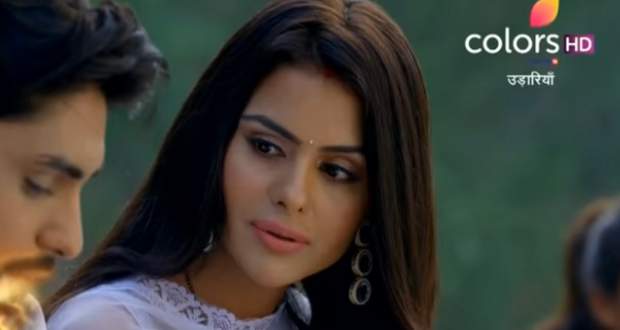 Today's Udaariyaan 26 July 2021 episode starts with Jasmin going in the parade in the early morning while Fateh also goes out jogging.

Tejo wakes up and looks for Fateh around the house while Jasmin meets Fateh and tells him that they both couldn't sleep because they were about to meet.

She apologizes to him and tells him that she doesn't want to get married to Gippy and that she loves him while Fateh cries.

She hugs him and cries on his shoulder while Fateh tries to hug her back but separates her from himself seeing Tejo coming towards them. Jasmin leaves with the crowd while Tejo goes to Fateh and talks to him.

Later, Jasmin's family is preparing for her engagement while she tells Sweety that she doesn't want to get married to Gippy and that she is sure that Fateh will come.

Tejo comes with Fateh's family and Jasmin runs downstairs to meet Fateh but gets upset learning that he has not come.

Fateh's family recalls how they got insulted and leave while Jasmin rips her Dupatta and goes to her room with Sweety with the excuse to change it.

Jasmin packs her bags and tells Sweety to take care of the situation as she's running away. She is about to leave but hears Fateh's voice and stops.

Fateh dances with Tejo while Jasmin rushes downstairs. Everyone is dancing while somewhere else, Fateh meets Jasmin and tells her that he still loves her.