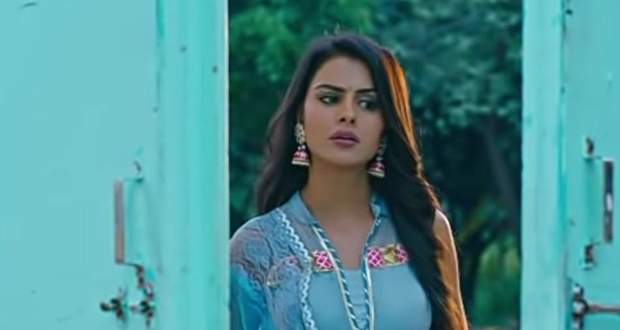 Today's Udaariyaan 27 August 2021 episode starts with Tejo falling due to the oil and calling out to Jasmin while Fateh tells Jasmin to keep her outside until he leaves.

However, Jasmin thinks to show Fateh to her and takes her to the room but gets angry seeing him gone.

Fateh jumps from the window and drives away in his car while thinking about Tejo's words.

Fateh stops the car and looks for his phone while realizing that Jasmin has it.

Elsewhere, Tejo sees two cups of tea and asks Jasmin who lies that her friend had come earlier.

Tejo goes to the bathroom while Fateh's phone rings and Jasmin hides it under the tray.

Later, Fateh worries thinking that Tejo might have seen his phone when she comes home and informs him about her visit to Jasmin.

Fateh learns that Jasmin had called her there and leaves to confront Jasmin.

He shouts at Jasmin and confronts her while she accepts that she had intentionally called Tejo there so that she can see them together.

He fights with her for playing games with him and leaves in anger saying that it's over.

Jasmin runs after his car and starts crying.

Fateh comes home and Tejo tells him to have dinner but he refuses while Gurpreet worries for them.

Further, Tejo takes dinner for him to the room and jokes with him to lift his mood and make him eat.

© Copyright tellybest.com, 2020, 2021. All Rights Reserved. Unauthorized use and/or duplication of any material from tellybest.com without written permission is strictly prohibited.
Cached Saved on: Thursday 27th of January 2022 01:13:26 PM