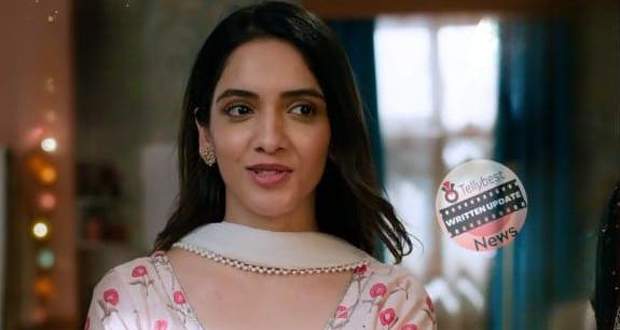 He also calls her the biggest blessing in his life.

Elsewhere, in college, Naaz accidentally crashes into Varun spilling coffee on him.

Seeing Naaz, Varun apologizes to her for making her drunk at the party while Naaz takes advantage of the situation.

Naaz wipes his shirt with a napkin and pulls out his wallet from his back pocket sneakily.

At night, Nehmat and Ekam are gazing at the stars and Ekam expresses his desire to put an end to his father’s sadness.

In Randhawa's house, Jay is cooking happily and Renuka gets emotional seeing her husband happy after a long time.

Later, Renuka finds out that Ekam is with Nehmat and curses Nehmat for trapping her son.

On the other hand, Nehmat and Ekam compare the stars to Fatejo and she cries recalling her precious moments spent with her parents.

Nehmat tells Ekam about her suspicion of Fatejo's accident not being an accident.

Meanwhile, Nehmat informs Ekam that Jay used to visit Virk's house to investigate Fatejo’s case but the case got declared an accident case.

Later, in Randhawa's house, Jay serves the Biryani happily and Ekam hugs him recalling his nightmare.

Ekam pesters his father, to tell the truth about the Virk family accident and requests him to help him solve the mystery case.

Meanwhile, Jay gets furious and refuses to help him and declares Fatejo’s accident was an accident, and runs to his room.

The next morning, the Sandhu family is preparing for Kanjaka (a ritual of feeding little girls and worshiping them symbolically as a goddess).

Shelly gives Naaz's clothes to Nehmat and asks her to put them in Naaz’s room.

At the same time, Naaz dreams of defeating Nehmat by marrying Varun as he is richer than Ekam.

Meanwhile, Nehmat enters the room and picks up the wallet but Naaz snatches it from her hand.

Nehmat asks Naaz about the wallet’s owner but Naaz lies and makes an excuse of going out to return the wallet.

In Rupi’s room, Rupi is cleaning his wardrobe and finds Jasmine’s letter and recalls his promise to Fatejo of never telling Nehmat about her unknown blood.

At the same time, Nehmat enters the room and he gets scared while holding the letter with shivering hands.

© Copyright tellybest.com, 2020, 2021. All Rights Reserved. Unauthorized use and/or duplication of any material from tellybest.com without written permission is strictly prohibited.
Cached Saved on: Sunday 2nd of October 2022 12:20:09 AM