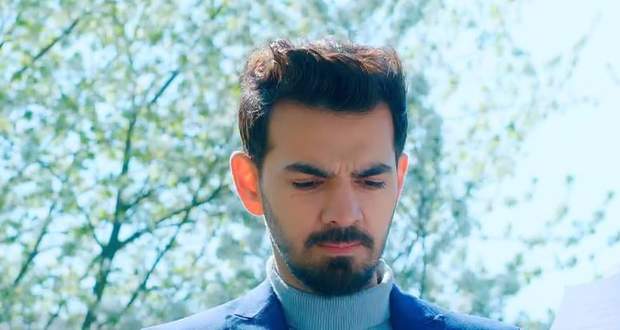 Today's Udaariyaan 28th April 2022 episode starts with both the families finding out that Amrik and Jasmine have eloped together.

On the other hand, in London, to assure that the girl is Tanya, Angad lingers around Tanya's cafeteria.

When Tanya walks out of the cafe, Angad overhears her informing her landlord's daughter that her room keys are below the doormat.

Tanya also mentions that it is her birthday however, Tejo's birthday falls in September.

After assuring that no one is around, Angad takes out the keys and sneaks into Tanya's room.

After checking every corner of her room, Angad spots Tanya's top-secret money jar and a passport issued by United Kingdoms.

Angad is left surprised to see the name Tanya Gill in it.

In the meantime, Jasmine and Amrik arrive in London.

Jasmine kisses the ground in the happiness of being free.

Abhiraj also insults Simran by saying that the elder daughter of the Virk family has also eloped.

This leads to a fight between Abhiraj and Buzo but Fateh stops them with a scream.

Further, Fateh informs that he found the cab driver's number and he'll make a call to him.

After talking, Fateh says that the driver dropped Jasmine and Amrik at the airport.

The Virk and the Sandhu family get back to their blame game.

Unaware of the chaos they have created, Jasmine and Amrik enjoy wandering in London.

Though Amrik wishes to inform the family once, Jasmine asks him to forget all those things as they are in London.