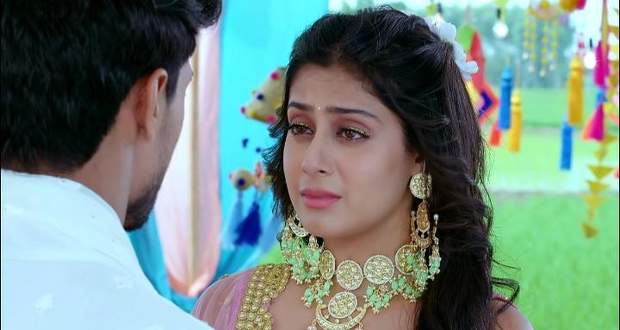 Today's Udaariyaan 28 July 2021 episode starts with Satti talking to Gippy's mom and informing everyone that the engagement and marriage will happen at the same time.

Later, Fateh and Jasmin talk to each other on a video call and disconnect after planning to meet each other at the mall the next day.

The next morning, Tejo makes Parathas's for the family while Fateh admires Jasmin's picture on the phone.

She calls him and his phone falls but he picks it up in a hurry while lying to Tejo that it's the coach on the call.

She tells him that they have to go out with her colleagues and he agrees but later, Jasmin tells him to cancel his plans with Tejo and meet her.

Mami stops Jasmin but she lies that she is going shopping with Gippy and Mami calls Gippy to make sure.

He agrees to Jasmin's plan which shocks Mami but she lets Jasmin go.

Elsewhere, Fateh tells Tejo that he can't come to the get-together as he has to go to Chandigarh for an important meeting.

Later, Jasmin's taxi gets stuck and she stands outside to hire another taxi but gets shocked Tejo.

Tejo notices her and asks her where she is going while the driver says Chandigarh which makes them tensed.