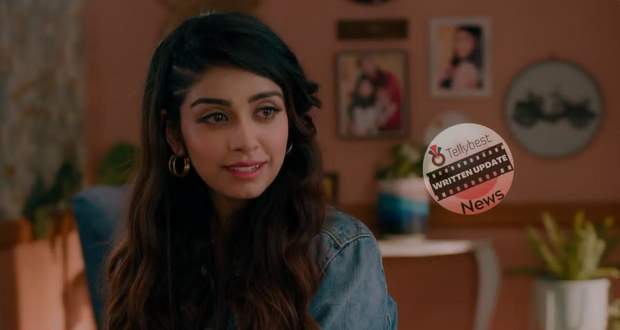 Today's Udaariyaan 28th September 2022 episode starts with a panicked Rupi folding Jasmine's letter and trying to put the letter in his pocket but the letter falls on the floor accidentally.

On the other hand, Naaz meets Varun in a cafe to return his wallet and innocently asks him to check all the contents.

Meanwhile, Nehmat and Ekam are sitting in the same cafe and Nehmat advises Ekam to forgive his parents for their harsh words and appreciate them as his parents are alive unlike her.

At the same time, Varun invites Naaz for a movie night and she gets excited at the opportunity to get close to him.

However, Naaz sees Nehmat and Ekam together and leaves from the cafe after making an excuse to Varun.

Later, the Sandhu family is buying clothes and Sati requests Nehmat to bring her purse from Rupi's room.

Entering Rupi's room, Nehmat sees the letter on the floor and recognises that it's Jasmine’s letter as the handwriting was not Tejo's.

Meanwhile, Nehmat sees her name on the letter and gets curious but Naaz interrupts her and takes her out of the room.

Going out of the room, Nehmat throws the letter away and Rupi picks it up after she goes out.

Later, Nehmat tries to find the letter in Rupi’s room but finds it missing.

The next morning, Ekam enters Nehmat’s house with an excuse of eating radish parathas and grates radish while the Sandhu recalls Tejo’s cooking.

Afterwards, Ekam asks for Rupi’s help and informs him about his suspicion of Fatejo’s accident being a murder.

However, Rupi shocks Ekam by telling him about sub inspector Nihal Singh who came to investigate Fatejo’s case after Ekam’s father.

After talking to Rupi, Ekam decides to catch Fatejo’s murderers and put them behind the bars.

On the other hand, Naaz melts on Varun’s wealth when he arranges a table in a fully booked cafe.

In the car, Nehmat asks Ekam about the reason for his regular visits and asks about his conversation with Rupi.

However, Ekam changes the topic and tells Nehmat to enjoy the drive.

Reaching the police station, Ekam congratulates his friend for his police posting and asks for his help in Fatejo’s case.

© Copyright tellybest.com, 2022, 2023. All Rights Reserved. Unauthorized use and/or duplication of any material from tellybest.com without written permission is strictly prohibited.
Cached Saved on: Monday 21st of November 2022 11:54:21 AMCached Disp on: Wednesday 7th of December 2022 11:12:24 AM