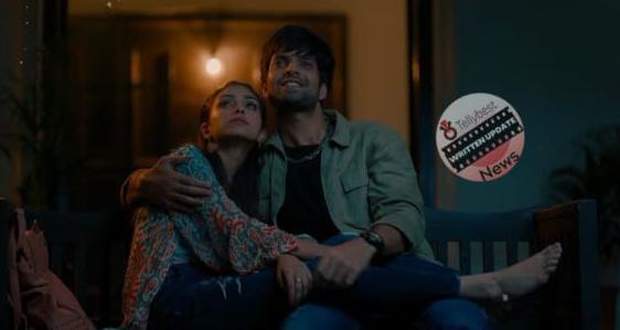 Today's Udaariyaan 29th September 2022 episode starts with Ekam asking his police friend about Nihal Singh's whereabouts and his friend agrees to help him with Fatejo's case.

Outside the police station, Nehmat buys a bundle of balloons from poor kids and Ekam confesses his love to her.

Later, a policeman tells the goon about a boy snooping around to reopen Fatejo’s accident case.

At night, Ekam surprises Nehmat with fireflies in the wheat fields and she plays with them happily while he admires his girlfriend’s innocent nature.

On the other hand, Jay enters the goon’s location and furiously asks the goon about the reason for calling him there.

Meanwhile, the goon points the gun at Jay and informs him about Ekam reopening Fatejo’s case for Nehmat.

On the wheat fields, Ekam catches the fireflies with Nehmat and promises to be with her forever.

Meanwhile, she promises him that she will always run behind him and caught him and brushes her nose with his.

On the other hand, the goons order Jay to stop Ekam from opening Fatejo’s case and threatens him to keep his son away from Fatejo’s case.

The goons order Jay to separate Nehmat from Ekam as he is doing this for her.

In the wheat field, Nehmat and Ekam promise to be together and hug each other and listen to their beloved heartbeats.

Later, at Sandhu’s house, Nehmat kisses Ekam’s cheeks and tries to run shyly but he grabs her hand and traps her in his arms.

On the other hand, Rupi shivers in fear and thinks how he can be free from the clutches of fear.

Elsewhere, a man calls the goon and orders him to refrain Ekam from opening Fatejo’s case.

The next morning, Nehmat tells his boyfriend about Jasmine’s letter and informs him about his suspicion.

Meanwhile, she recalls Jasmine and tells Ekam about her suspicions of Jasmine leaving her intentionally.

On the other hand, Malika crashes into a man and falls in love with him at the first sight.

Later, Ekam and Nehmat visit the mosque to pray for their pure union.

However, when Nehmat bends to pray a man comes in between and the Imam puts the Chadar on them while Ekam gets shocked.

© Copyright tellybest.com, 2022, 2023. All Rights Reserved. Unauthorized use and/or duplication of any material from tellybest.com without written permission is strictly prohibited.
Cached Saved on: Monday 21st of November 2022 10:33:06 AMCached Disp on: Thursday 1st of December 2022 11:35:39 AM