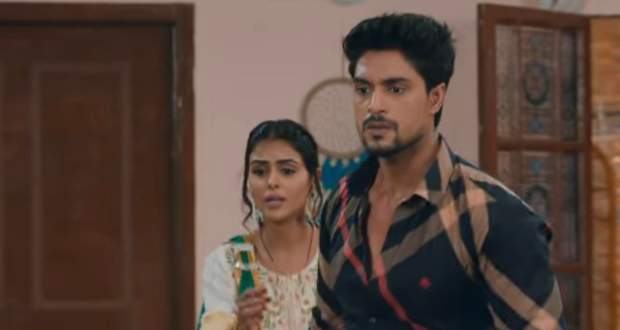 Today's Udaariyaan 2nd August 2021 episode starts with Hippy trying to convince the family that he doesn't know Sweety but they don't believe her and throwing him out of the house after insulting him.

Fateh signals no to Jasmin but she ignores him and smiles instead.

Mami tries to stand up for Gippy and Satti fights with her for it.

At night, Fateh feels guilty about not doing anything while Tejo tells him that she's glad she got him as a partner as he would never cheat her.

He goes for a walk while Tejo goes after him and tries to cheer him up by having him eat noodles with her.

The next morning, Jasmin acts upset in front of the family while Fateh calls her and tells her that he wants to meet her.

Fateh is leaving while Tejo tells him that she will come along but he makes an excuse and leaves.

Jasmin also makes an excuse of going to see Sweety and leaves home.

Dilraj calls Tejo and asks her to come home to teach her and she agrees.

Elsewhere, Mami and Gippy are talking together as Mami reveals Jasmin's deeds to him.

She apologizes to him saying that she thought Jasmin might change.

Meanwhile, Fateh scolds Jasmin for making Gippy look bad in front of everyone just to stop her marriage while she tries to justify her actions.

Hippy asks Mami why she is telling him and asking for his help while Tejo sees them and gets shocked.

Mami tells Gippy that she is going through everything for Tejo as Tejo doesn't realize Jasmin's evil motives as Tejo looks on.