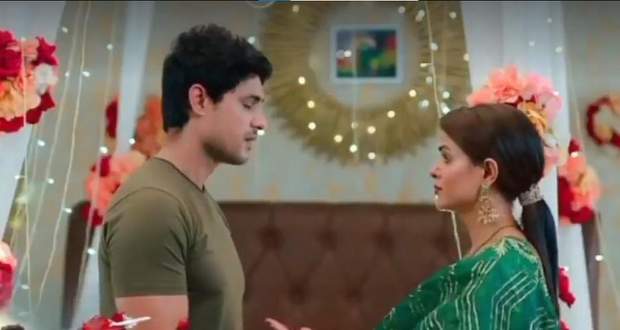 Today's Udaariyaan 2nd August 2022 episode starts with Tejo opening the door while Fateh stands up and pleads with her to talk to him.

He holds her face in his hands gently and tells her that he doesn't want a baby and only needs his Tejo.

Just then, Gurpreet, who has overheard everything, drops the tray in her hands and rushes away from there with Fateh going after her.

Elsewhere, Simran is dropping off Candy at the school and fastens her pace noticing that a man is following them.

Simran further stays alert as she returns home while the man who is stalking her is none other than Amanpreet, Candy's biological father and Simran's ex-husband.

Back at the Sandhu house, Gurpreet cries to Fateh saying that she cannot be a mother and that the Virk family's lineage ends there.

Meanwhile, Simran returns home and calls the stalker threatening to report him to the police if he comes near Candy again.

However, Amanpreet just mocks Simran and disconnects as Simran fears recognizing the voice and learning that the stalker is indeed her ex-fiance, Amanpreet.

As soon as the phone disconnects, someone knocks on their door and Simran goes to open the door and hit him with a vase.

Buzo however manages to stop her and she hugs him revealing everything to him.

The next day, Fateh meets up with Jasmine and tells her that he was to make a deal with her.

Jasmine gets curious and asks her what he wants after which Fateh tells her that he wants her to birth the baby at Virk's house in exchange for him not exposing her to Tejo and the police.

Fateh tells her that he doesn't care if she also stays at the Virk house or not and leaves while Jasmine wonders why Fateh is willing to keep her in the Virk house.

At night, Fateh sees Tejo sitting in the corner of the room and goes to sit with her comforting her and saying that they can also adopt a child.

However, Tejo tells that the family won't accept them.

At the same time, Simran sees someone roaming outside the house and goes outside where she finds an envelope with herself, Buzo, and Candy's pictures in it.

Meanwhile, at the Virk house, Nimmo tries to get the Virk family against Tejo while Jasmine comes inside and states she will give them an heir.

Tejo looks on from afar and gets emotional noticing Jasmine speaking up for her and against Nimmo.

© Copyright tellybest.com, 2020, 2021. All Rights Reserved. Unauthorized use and/or duplication of any material from tellybest.com without written permission is strictly prohibited.
Cached Saved on: Saturday 1st of October 2022 10:07:24 PMCached Disp on: Monday 3rd of October 2022 08:12:29 PM