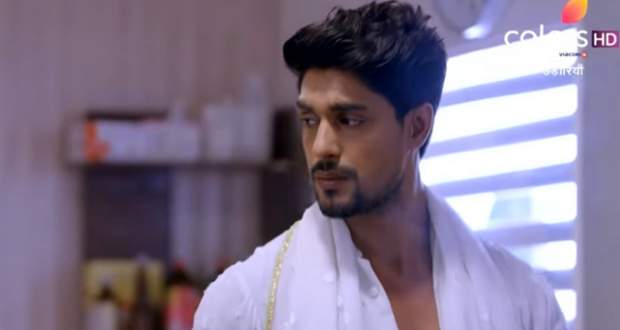 Later, they leave the mall and Jasmin tries to sit in the front with Fateh but he stops her and tells Tejo to do it.

Jasmin puts her hand near Fateh while he fears Tejo seeing them.

At night, Fateh and Jasmin are talking on a video call while Tejo looks for him and goes to the terrace.

Tejo saves him from getting bitten by an insect and tells him that her father wanted to talk to him.

Rupy invites him and Tejo over for lunch the next day and he agrees.

Later, he gets shocked seeing their room decorated romantically while Tejo gets upset seeing his sullen face.

She tries to do romance with him but he lies to her that he has a headache and she gets worried for him.

She massages his head as he puts his head on her lap and falls asleep.

The next morning, Gippy goes to Jasmin's house and asks her for the passport to get her visa while she realizes that she had burned her passport.

She fakes finding it and then tells the family that she has misplaced it.

Gippy leaves saying that he will come back in the afternoon and the family starts looking for it around the house.

Later, she makes an excuse of going to the college to check for her locker and meets Fateh.

She tells him that her marriage will be canceled very soon as she has already formed a plan.

Upcoming Udariya written episode update: Fateh gets into a fight with Gippy.