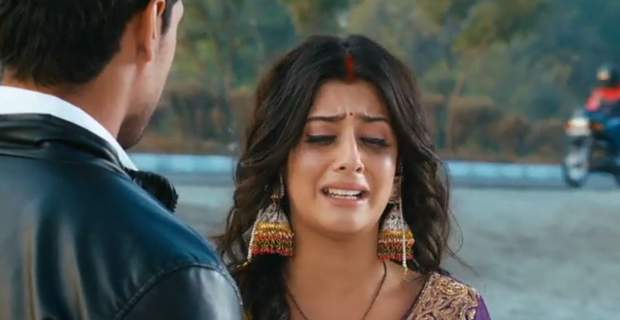 Today's Udaariyaan 3 December 2021 episode starts with Jasmine creating drama at the airport when the airport security throws her out.

Fateh walks on the road recalling his moments with Tejo and wondering how will he ever get over Tejo.

Meanwhile, Angad and Tejo reach the house where Tejo will be staying.

Angad tells Tejo that he has everything planned out for her but asks her to rest for the day.

Later, Angad sees his daughter and gets happy. Angad realizes that he is not supposed to see her and gets angry at the housekeepers.

The housekeepers inform that she hid in the car and came home from the hostel.

Angad shouts at his daughter for coming home as it is going to create a lot of problems in his life.

Tejo tells Angad that how can he talk in such a way to his daughter. Angad asks her not to interfere in his family matters.

Tejo gets surprised to see Angad is such a condition.

Meanwhile, Ruppi tells everyone that Tejo and Angad had a fake engagement.

Everyone gets tense about Tejo but Ruppi assures that Angad will take care of Tejo.

Later, Ruppi burns all the these which they had made for their dream of going to Canada.

Suddenly, someone knocks on the door. Ruppi gets shocked to see Jasmine crying on his doorstep.

Jasmine requests Ruppi to take her back as she is his daughter. She also tells Ruppi that Fateh has left her alone at the airport.

Ruppi thanks God for punishing Jasmine for her deeds.

© Copyright tellybest.com, 2020, 2021. All Rights Reserved. Unauthorized use and/or duplication of any material from tellybest.com without written permission is strictly prohibited.
Cached Saved on: Thursday 20th of January 2022 04:00:24 AM