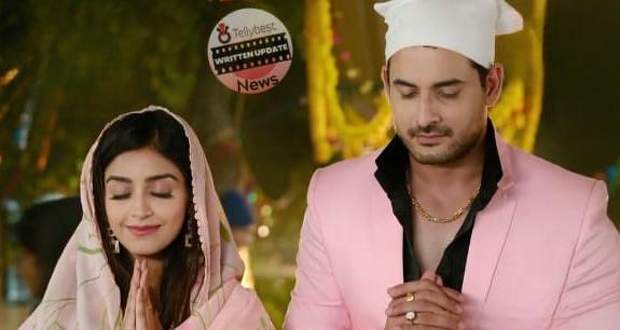 At the police station, Ekam's friend apologizes to him as he was not able to retrieve Virk's accident case file.

Meanwhile, Nehmat calls Malika to the market as she wants to buy a saree for Ekam’s mother.

At the same time, a handsome man walks beside Nehmat while her bag falls on the ground and her dupatta flies and falls on the stranger's face.

The man slides the dupatta from his face and walks ahead but turns around to take a peek at her.

Afterwards, Malika thanks her stars after she sees the same stranger she crashed into yesterday and follows him but she crashes into an old man.

The same stranger picks up the old man and her eyes get wide as she meets her crush for the first time.

However, the man scolds Malika for not walking carefully while she gets lost in his eyes and does not say anything and he walks away ignoring her.

In the shopping complex, Malika tells Nehmat about the accidental meeting with her crush while the same man is roaming the other aisle.

A lucky draw is organised in the shopping complex and the employees ask Advait and Nehmat about their partner's name but misunderstand and write Nehmat as Advait’s partner and vice-versa.

In college, Varun sees Naaz talking to a man and gets jealous and takes her aside and accuses her of cheating on him.

Meanwhile, Naaz gets shocked at his harsh behaviour and apologizes to him for the fear of losing him.

In the shopping complex, the employees announce Advait and Nehmat's names as the winner but she ignores it thinking it might be someone else.

At the same time, Ekam runs into the shopping complex and apologizes to Nehmat as she is angry at him for not coming on time.

He kisses her cheeks trying to pacify her but she says she is going to leave him as he does not respect her time.

Hearing Nehmat’s words, Ekam gets emotional recalling his father’s demand of breaking up with his girlfriend and hugs her tightly.

On the other hand, Advait greets his father (Shamsheer Kapoor) good morning and he gets happy seeing his son.

Later, Shamsher Kapoor advises his son to keep his image clean for elections.

He also tells Advait about Jayveer's son trying to open the Virk family accident case and he orders his son (Advait) to take care of him.

Advait assures his father that he will not let anyone reopen the case.

© Copyright tellybest.com, 2022, 2023. All Rights Reserved. Unauthorized use and/or duplication of any material from tellybest.com without written permission is strictly prohibited.
Cached Saved on: Monday 21st of November 2022 07:54:36 AMCached Disp on: Sunday 4th of December 2022 11:59:28 PM