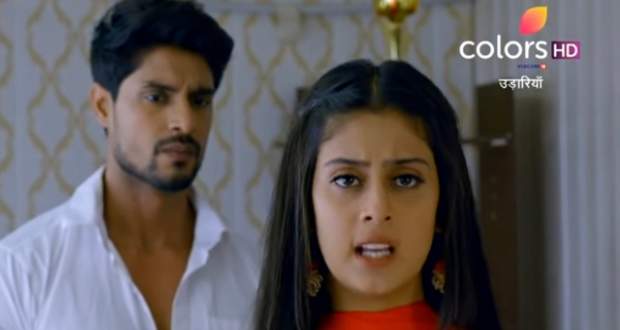 Today's Udaariyaan 4 August 2021 episode starts with Mahi asking Tejo why she is worried and Tejo informing her about Fateh's distant behavior.

They hear Gurpreet shout and rush to see her having an asthma attack.

Tejo calls Fateh and he returns home with medicines while canceling his plans with Jasmin.

Elsewhere, Jasmin tells the driver to go back while Gippy fears that she might have seen him.

Fateh sees Tejo caring for Gurpreet and praises her while she tells him that she is glad they are together as he also cares for her family even after what Jasmin did.

The next morning, Tejo gets ready in the red saree for the college party with their spouses but Fateh doesn't notice her and thinks about Jasmin.

He calls Jasmin and they plan to meet at Shera Punjab restaurant as Fateh lies to Tejo and says that he can't come with her to the party.

She asks him if he is upset with her and he denies it and leaves.

Tejo goes to inform Gurpreet about her leaving for the party and Gurpreet gives her a necklace saying that she had gotten it for Simran but she might never wear it.

They talk about Simar after which Tejo leaves.

Later, Tejo collides with Simran while going to the party but doesn't see her.

Simran gets shocked seeing Tejo wear her necklace as leaves before Tejo can look at her properly.

Meanwhile, Jasmin and Fateh reach the restaurant and order food while Gippy looks on and thinks that it will be their last meal together.

© Copyright tellybest.com, 2020, 2021. All Rights Reserved. Unauthorized use and/or duplication of any material from tellybest.com without written permission is strictly prohibited.
Cached Saved on: Friday 5th of August 2022 03:44:06 AMCached Disp on: Thursday 11th of August 2022 11:39:11 AM