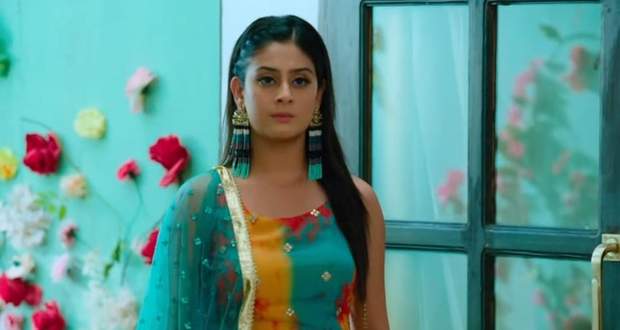 Today's Udaariyaan 4th August 2022 episode starts with Amanpreet telling Simran to make tea for him while he recalls his tortures.

Further, Candy comes there and Aman tries to give him chocolates but Candy refuses saying that they shouldn't take anything from strangers.

Aman states that he's not a stranger and is about to reveal to Candy that he's Candy's father.

However, Tejo stops Aman and makes Candy go outside.

Mahi takes Candy outside while Fateh and Aman get into a physical fight.

Tejo again stops them and questions Aman on what right has he returned.

Aman smiles creepily and praises her intelligence and states that he will give the proof to Simran in private.

Having enough of him, Tejo calls Fateh to call the police while Simran hesitates and stops the police.

Aman threatens the family that they will be humiliated in society if they learn that their unmarried daughter was carrying a child.

Just then Buzo comes there and Aman tries to manipulate him with his words but it doesn't work after which Aman mocks him for taking care of a child that isn't his.

Aman further shows everyone the DNA reports that confirm that he is Candy's biological father with the sample he took of Candy's hair strand when he went missing.

Further, Fateh and Buzo drag Aman outside but Aman locks the door from the outside to prevent them from going to the police station.

Meanwhile, inside the house, Simran is hesitant to file an FIR fearing that Candy will be taken away from her.

However, Tejo and Fateh convince her after which he and Buzo go to the terrace and leave the house to go to the police station.

Later, Jasmine requests Tejo to make Pakoras for her but Tejo makes Paneer Bhurji for her due to Jasmine's acidity problems.

In the kitchen, Simran tries to help Tejo but cuts her finger and Tejo takes her to the hall to take care of the injury.

Just then, Jasmine gets a call from her friend Nikki who invites her to a party and Jasmine happily agrees and wonders whom to convince to come with her to the party.

Back in the hall, Simran has an emotional breakdown and she reveals to the family all the tortures that Aman did to her when she was in Canada with him and how she managed to escape from there.

Simran cries to the family that she's worried since Aman is a criminal and has no fear of the police.