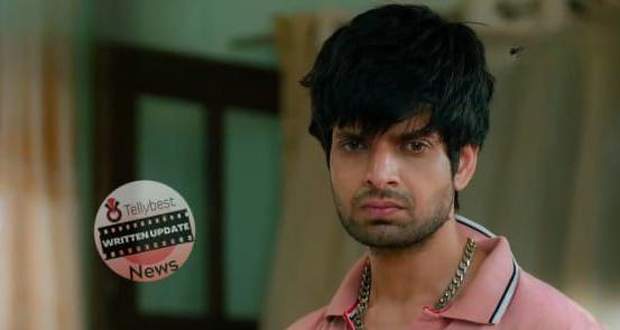 Meanwhile, Advait comes in support and Nehmat scolds him for using his political power to hinder students' bright future.

At the same time, a college employee announces that the student will get admission through the admission quota and Nehmat cheers for her win.

Advait gets impressed by her fierce attitude and thinks he can use her for a political agenda.

Later, Ekam praises Nehmat for winning while Advait gets a picture of Ekam and Nehmat from his father and he recognises the girl as Nehmat.

The next morning, the young girls (kanjak) are fed and Nehmat invites Malika to her house to eat the delicacies.

In college, Malika is waiting for her crush (Advait) desperately and his car enters the college and she cuts Nehmat’s call excitedly.

In Sandhu’s house, Rupi tells Naaz, Shelly and Nehmat to sit on the ground as they are also their kanjaks and Malika also enters and sits with them.

After distributing the prasad, Rupi and Sati enter their room and she advises her husband to talk about Jayveer's irrational demand with Malika but he refuses and states that he will talk to Jayveer himself.

Later, Malika tells Nehmat about her meeting with Advait and tells her how she crashed into Advait’s car intentionally and he came out worried while Malika is holding her knee.

Advait picked her up and Malika introduced herself to him but he went back when he got a call.

Back to the present, Malika is about to show her Advait’s picture but Naaz comes and curiously asks about Malika’s hero.

However, Malika insults Naaz but Nehmat makes her best friend apologise to her sister.

Outside the house, angry Naaz punches a hole in Malika’s car as her revenge.

In Randhawa's house, Rupi asks Jayveer about his sudden anger but he accuses Nehmat of being a characterless girl as she is roaming around Ekam like a butterfly.

Rupi gets furious and tells him he respected him until now because he was Fateh’s friend and their child grew up together but now he has crossed all his limits.

However, Jayveer states he will never let Ekam marry a characterless girl like Nehmat and furious Rupi grabs his collar and insults Jayveer for questioning a girl's character even after being a father of a daughter himself.

Afterwards, Rupi breaks all his ties with the Randhawa family and goes back home.

In Sandhu’s house, Nehmat is going to meet Ekam and meet Rupi on the way out who asks her where she is going.

Nehmat tells Rupi that she is going to meet Ekam and an angry Rupi orders Nehmat to never meet Ekam again.

© Copyright tellybest.com, 2022, 2023. All Rights Reserved. Unauthorized use and/or duplication of any material from tellybest.com without written permission is strictly prohibited.
Cached Saved on: Monday 21st of November 2022 08:08:23 AMCached Disp on: Saturday 10th of December 2022 03:21:21 PM