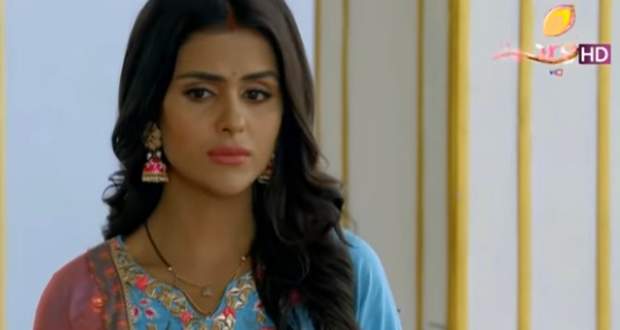 Today's Udaariyaan 5 August 2021 episode starts with Tejo talking to colleagues and telling them that Fateh has fully moved on from Jasmin.

Meanwhile, Jasmin takes Fateh's phone and changes their contact names so that they can safely talk while home.

Gippy clicks their pictures and calls Mami who tells him to come home so that they can expose Jasmin.

Gippy reaches home and Mami says that he has proof of Jasmin being with Fateh and tells Gippy to show the pictures.

Just then Jasmin also comes there and acts innocent.

Gippy fails to find his phone and goes to search in the car.

However, Khusbeer comes there and takes the picture saying that Simran is dead for them.

Tejo cries to convince Khushbeer while Gurpreet stops her and cries to her as Fateh returns home.

Gippy returns empty handed while Jasmin recalls calling Amrik and lying to him that Gippy has her personal pictures in him phone and requesting him to steal Gippy's phone.

The flashback shows Amrik colliding his car with Gippy and stealing his phone while fighting with him.

Gippy says that Jasmin is behind it but no one believes him.

Jasmin acts of crying and rushes to her room.

Elsewhere, Fateh calms a crying Tejo and reveals to her that he is still in love with Jasmin which shocks her.