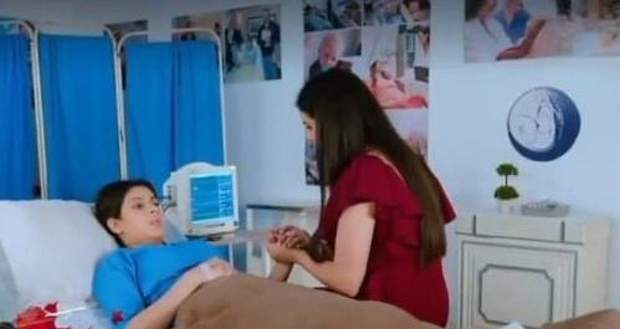 Today's Udaariyaan 6th August 2022 episode starts with Amanpreet arriving at Fateh’s residence along with the police and accusing Simran of beating him up.

Tejo and others refuse the allegations but Amanpreet instigates the police to arrest Simran as she is the one who beat him brutally.

Simran tells the police that she did not do anything as Amanpreet is telling and is suffering from harassment by Amanpreet himself.

Trying to flip the situation, Amanpreet says that everyone is supporting Simran because she is a woman but he believes that the police will not be biased.

Amanpreet further shows his wounds to everyone and says that Simran is the one who imposed those.

The police inform everyone that Amanpreet has also lodged one FIR against Simran just before Tejo and Fateh did in another police station.

Seeing Amanpreet smirk, Fateh loses his temper and tries to charge onto him but Tejo stops him from doing so.

The policewomen cuff Simran and proceed to take her to the police station while everyone continues to request the police that Amanpreet is lying.

Candy comes running to Simran and stops her from being taken but the police still continue to take away Simran.

Fateh and Buzzo assure Simran that they will bail her before the day ends and leave for the police station after Simran.

Later, Rupy contacts the judge’s brother so that they can get an early bail for Simran.

Tejo hugs Candy and tries to comfort her but Amanpreet attempts to come closer to Candy.

Telling Candy that he is his father, Amanpreet tries to hug Candy but gets pushed away by Tejo.

Tejo warns Amanpreet not to come close to Candy from now on and asks him to leave their house at the earliest.

In reply, Amanpreet tells Tejo that he will come back soon for Candy and will snatch him in one way or another.

Meanwhile, Jasmine cries at the clinic and regrets losing her child while Dimple asks her how she will hide the truth from her family.

Tejo calls Jasmine and informs her about Simran’s arrest and asks her to come back home.

Elsewhere, Amanpreet drinks with his men and enjoys his victory as Simran cannot get out easily from the jail.