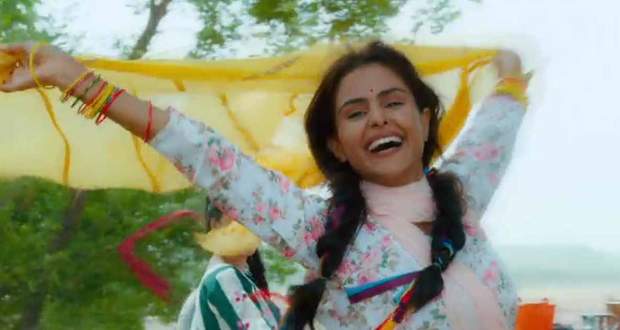 Today's Udaariyaan 7th June 2022 episode starts with Fateh driving back to his house while recalling the words of all the family members suggesting to marry Jasmine.

Elsewhere, Rupy and Satti worry for Tejo (Tanya) when she comes there and informs them that she had gone to convince Fateh to agree to the marriage with Fateh.

Jasmine watches them from the stairs and anticipates their decision while Rupy tells Tejo (Tanya) that he understands her.

Finally, Rupy puts Tanya's hand on his head and makes her swear if she means what she says and Tanya agrees saying that she wants Fateh to marry Jasmine.

Rupy and Satti get shocked but regain their composure and tell Tejo (Tanya) to give Fateh some time to make his decision.

Later, Tanya counts the money and says that she still needs one lakh for her mother's treatment and worries.

Just then, Jasmine hands the money to her and says that she is giving her advance money due to her impressive acting skills.

Tanya asks her about breaking Fateh's dreams while Jasmine lashes out at her.

However, upon realizing her mistake, Jasmine acts as fainting and requests Tanya to bring milk for her.

Fateh sees a Fakir baba and goes to him while Tejo is seen playing Cat's cradle.

Tejo tells Kamal that she and Fateh are attacking one another just like the thread while Fateh tells Fakir baba that she is sure of Tejo being alive.

Back at Sandhu's house, Tanya calls a man and informs him that she has arranged the money and demands to meet her mother.

The man tells her that he has put her mother at Sharan Aashram in Barnala and calls the caretaker to inform her that Tanya will be coming there.

At Sharan Aashram, Maai picks up the call and informs them that the lady (Tanya's mother) is in good condition while Tejo is seen playing around her.

Elsewhere, Jasmine goes to the Virk house and returns the things of Amrik she has while doing drama.

Meanwhile, Tanya goes to Sharan Aashram in disguise where she bumps into Tejo but doesn't see her face.