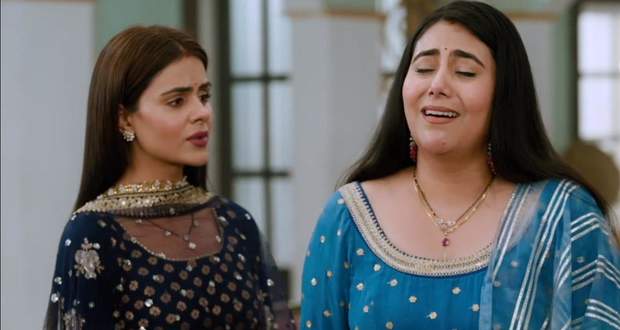 Today's Udaariyaan 8th August 2022 episode starts with Gurpreet and Mahi going to meet Simran in the jail to assure her that everyone is doing their best to get her out of jail.

However, Simran blames herself for the problems made by Amanpreet while Mahi consoles her.

On the other hand, Khushbeer pleads with the judge to bail Simran for Candy's sake but the judge refuses to listen.

At the bus stop, Dimple tries to stop Jasmine from leaving the city but Jasmine tells Dimple furiously that Fateh will send her to jail and tells Dimple to leave her alone.

Meanwhile, Candy is throwing a tantrum to meet Simran while Mahi tries to make Candy eat dinner but Candy urges to eat from Simran only.

At the same time, Simran enters and the whole Virk family's hearts burst with happiness while Candy hugs Simran affectionately.

Tejo told the event that happened to the family as how she had failed the judge's daughter in her exams and how the judge used his power, fame and money to get his daughter a degree while she requested the judge to bail Simran.

Simran expresses her concern about Amanpreet having a positive DNA report but Fateh assures her that he is going to meet the lawyer while Tejo comes along.

Meanwhile, Tejo expresses her concern about Amanpreet's foul acts while Fateh assures her.

Suddenly it starts to downpour while Fateh romantically holds Tejo and they start to move with the flow and hug each other to relieve the whole day's stress.

However, Amanpreet comes with his friends and starts to call names to Tejo and Fateh.

Fateh runs to beat him but Tejo stops him with great difficulty.

Tejo compares Amanpreet to dirty sewerage water while Amanpreet being an imbecile puts his duck-like eyeballs on Tejo and makes comments on her and goes from there cowardly while Fateh hits the car bonnet in anger.

Back in Virk's house, Tejo treats his hand while advising him to keep his temper in check while dealing with Himbo Amanpreet.

Meanwhile, Mahi comes and informs her about Jasmine's not being home until now while Gurpreet is fretting in worry Jasmine reaches home.

Fateh questions Jasmine's whereabouts but Jasmine spouts a lie and goes to her room hurriedly.

Later on, Gurpreet and Tejo take food and milk for Jasmine while Tejo tries to touch Jasmine's fake bump.

Meanwhile, panicky Jasmine swats Tejo's hand and makes an excuse of being tired while Gurpreet and Tejo leave the room.

© Copyright tellybest.com, 2022, 2023. All Rights Reserved. Unauthorized use and/or duplication of any material from tellybest.com without written permission is strictly prohibited.
Cached Saved on: Monday 21st of November 2022 05:39:50 PMCached Disp on: Friday 9th of December 2022 05:04:18 PM