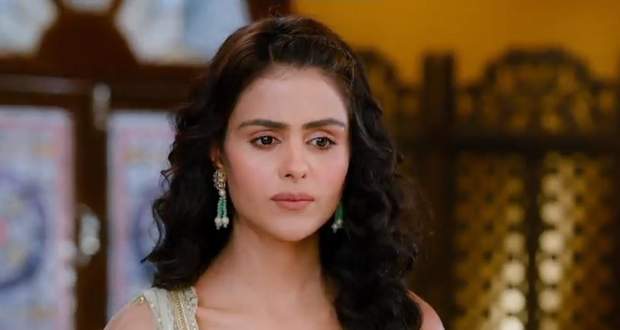 Today's Udaariyaan 8th June 2022 episode starts with Jasmine starting her drama and saying that now she doesn't have any memory of Amrik now.

Gurpreet tries to plead that she will talk to Fateh but Jasmine says that she doesn't want anyone to force Fateh.

Fateh feels conflicted while Jasmine sees him and thinks that her words are working.

Further, Tanya lies that she's a nurse and feeds her while telling her that she has a daughter named Tanya.

However, Mataji says that she's lying as if she had a daughter, she would be with her then.

Tanya goes to get water for Mataji while Tejo is hiding behind the well and requests water from her.

Tanya gives her the glass of water without seeing her face.

Later, as Tanya is leaving, Tejo hugs her from behind and thanks her for helping during the game.

As Tejo leaves, her earring gets stuck in Tanya's dupatta.

Just then, Jasmine calls Tanya and tells her to call Fateh and tell him what she says.

Amma notices Tejo's missing earring and offers to give her another one.

Fateh informs about this to Mahi and leaves.

Fateh reaches the hospital and tries to convince Jasmine saying that they can look for another solution.

However, Jasmine tries to persuade him to agree to the marriage when Fateh shockingly agrees with her saying that he can't marry her.

Fateh turns to leave while Jasmine requests the doctor to let her see the baby and hear its heartbeat for the last time.

Back at Barnala, Kamal calls herself Tejo's sister which triggers her to shout that "sister is bad" as Tanya looks on from far away.

Fateh stays back and sees the baby on screen while recalling Amrik's last words which were to take care of Jasmine.

Jasmine talks to her baby and bids it goodbye saying that she is sending them to their father.

Just then, Fateh drags Jasmine away from there and tells her that he is ready to marry her for the sake of the child.

Jasmine tells him to think it through as she would be devastated if he leaves the baby in the middle.

Feeling happy that her plan is working, Jasmine hugs Fateh.