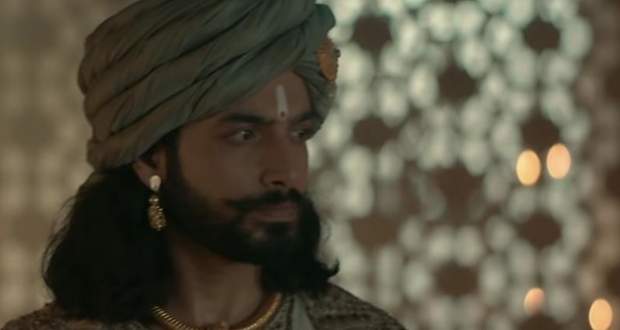 Today's Vidrohi 13 October 2021 episode starts with Flecher announcing that Maharaja Mukund has been pitied and released while revealing that his position as a king has been stripped from him.

Jagabandha tries to protest while Flecher reveals that Mukund will ne again arrested if any protests happen.

Mukund is about to fall but Jagabandhu holds him and makes him sit in the cart while others chant for them.

Maharaja Mukund reaches home and expresses that he wishes he could kill those Britishers while Jagabandhu says that he is waiting at his command.

Mukund is being treated while Radha and Maa console his wife saying that she has to support him at his crucial time.

Later, Radha meets Jagabandhu at the practice ground and he tells her that and his army is going to oppose the Britishers but she will have to suffer many sacrifices while she makes him circle the fire and promises to always support.

He admires her and tells her that he is lucky to have her.

Elsewhere, Kalyani's father tells her that there is no other choice other than to accept the offer of East India Company while she suggests waging war against them.

However, he tells her that he wants his children to be safe and tells her to marry and leave the place with Mohan but she refuses to do so saying that she will fight for her Badamba and leaves.

Fletcher gives an announcement to Charan tells him to spread it to the state while he warns to not provoke them.

The next day, Flecher comes to the palace and asks Maharaja about his decision while Maharaja apologises to his people and is about to give an announcement but Kalyani stops him.

Further, Flecher tells Kalyani that she will give the decision now and tells her to remember her brother, father and all the people of Badamba.