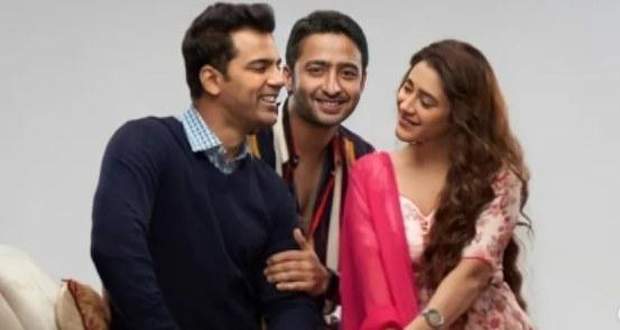 Today's Woh Toh Hai Albela 14th March 2022 episode starts with Krishna blowing the conch on the eve of the Holi festival while his loving brother, Chiranjeev stops him from stepping up on a sharp edge of a coconut shell.

At the same time, Mrs. Choudhary admires her son’s bonding and feels content.

On the other hand, Mrs. Choudhary reminiscences her memory of some conflict and blames a house mentioning it as her enemy while Krishna blocks her view with his Holi spree.

Meanwhile, Krishna throws his phone towards Nakul. Nakul grabs a rope and jumps to get down but his hand slips and falls.

However, Krishna catches Nakul and saves his life. Nakul proclaims nothing can ever happen to him with Krishna by his side.

Later, Krishna and Nakul dance and enjoy their time celebrating Holi with colors everywhere. The Choudhary brothers shake their legs and enjoy Holi.

Furthermore, the Choudhary brothers take blessings from their mother. Mrs. Choudhary sees a beautiful girl watching them and gets angry.

However, that beautiful and elegant girl is Sayuri who loves to paint and takes take of everyone and everything in her house.

On the other hand, Krishna captures a photo of his family and feels happy to be blessed with such a sweet family.

Later, Krishna applies white colour on Sayuri's face, Nakul shoots it with Krishna's phone. They tease her to annoy and run away.

However, Sayuri gets offended and blames Krishna for the separation of the families. She grabs a toy and fills it with colour.

Furthermore, Sayuri sprays the colour on Krishna and Nakul. The colour gets into Krishna's eye pissing him off.

On the other hand, Sayuri gets a glimpse of Chiranjeev. Her heart flutters feeling butterflies in her tummy and her cheeks glow pink from her blushing.

Later, the Choudharys enter the temple and pray.

At the same time, Sayuri and her family enter the temple.

Furthermore, Mrs. Choudhary recollects her slap from Sayuri's mother and boils up in anger witnessing them in the temple.

Krishna fires up a blaster, a fire paper fleck lands on Mrs. Choudhary's saree. Sayuri sees it and shouts out alarming her but the voice gets mixed up in the crowd.

To download Wo To Hai Albelaa all episodes or watch WTHA online today's (14 March 2022) latest full episode, go to hotstar.com