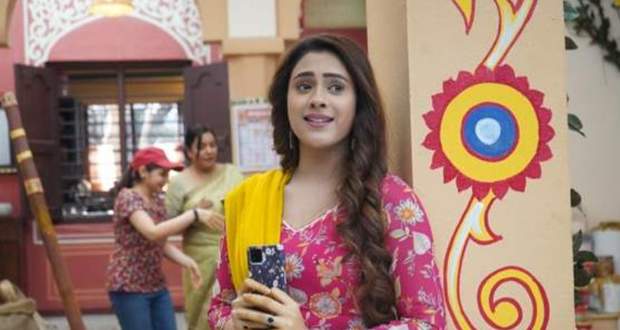 Rashmi imagines Nakul and her having the best time of their life with romantic and heart-fluttering moments.

Meanwhile, Sayuri's grandmother stops their bickering. Krishna asks her to get ready for the shoot later in the day. Priya agrees that Krishna's videos are the best.

After listening to Saroj, Sayuri bumps into Krishna's bike resulting in him falling. Saroj accuses her of a bad omen and talks harshly with her by blackmailing her that she will take her father's scooter away.

Elsewhere, Indu and Sayuri's grandmother talk about Sayuri's marriage while doing their chores.

Sayuri's grandmother asks Indu to calm down and talks about her past feminism. Indhu says that Balwant (Sayuri's father) took away her courage along with him.

Sayuri's grandmother assures Indhu that she will help with the marriage of her granddaughters.

From Choudhary’s house, Saroj gazes at Indhu with hatred and boils in anger. She decides to plan a lavish wedding for Chiru to show off her happiness.

Later, Nakul protects Rashmi from getting ragged by a group of boys. He asks her to accompany him to the canteen by removing her hair tie.

Sayuri tries calling Chiru, but he is preoccupied with the meetings and ignores her calls.

At the same time, Krishna bumps into Sayuri holding a plaque containing his name freshly inked on it. The ink sticks to her veil.

Already pissed Sayuri, bursts out in anger and tells him that she will burn her veil.