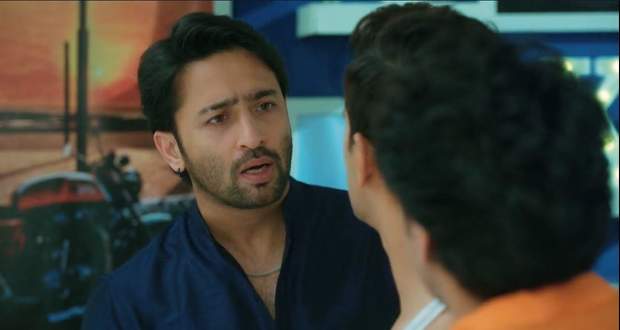 Today's Woh Toh Hai Albela 28th April 2022 episode starts with Kanha and Nakul packing up their bags to move out of their old room and make place for Sayuri.

Chiru watches his brothers pack their stuff up with sadness in their eyes but smiles on their faces.

Saroj enters the room where all three brothers hug one another.

Hating to break up the union, Saroj hands them amulets and tells them to tie them to each other's feet.

The amulet will act as Suraksha kavach as they are about to begin a new life and will prevent any dangers.

While tying the amulet, Kanha keeps thinking of how the wedding should not happen and worries if anything might go wrong.

Kanha adds multiple knots to the amulet to make it safer for Chiru.

Later, Chiru decides to leave but Kanha tells him to at least set dressed as they will be able to sit in the wedding right after they get back.

All three brothers, dressed beautifully, descend the stairs and everyone is left speechless.

Saroj is proud to see all her boys grow up to be such handsome and well-mannered men.

Here, Anjali flirts with Kanha and asks why they have been waiting as the whole family is there and the mandap is also ready.

Kanha understands Anjali's hint of getting married and storms off.

Anjali promises to herself that once Chiru gets married, Kanha will have to marry her too.

On the other hand, Chiru tells Saroj to understand Kahna and always see the real motive behind his actions.

Chiru lies to Saroj and leaves to get the gift for Sayuri, his amulet falls off unnoticed.

Here, Balwant meets Sayuri and tells her that it will be hard to adjust to that house and that she should never back off.

© Copyright tellybest.com, 2022, 2023. All Rights Reserved. Unauthorized use and/or duplication of any material from tellybest.com without written permission is strictly prohibited.
Cached Saved on: Wednesday 25th of January 2023 10:31:15 PMCached Disp on: Thursday 9th of February 2023 04:41:43 AM