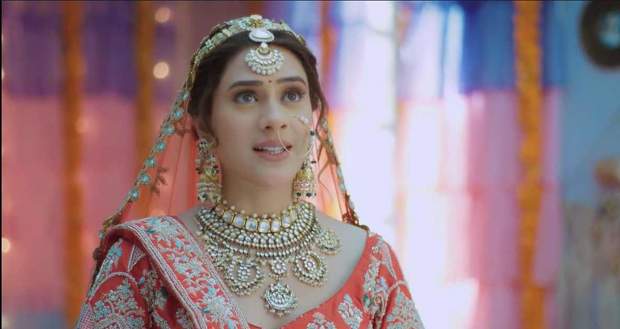 Today's Woh Toh Hai Albela 29th April 2022 episode starts with Kanha and Chiru plotting their plan of escaping from home and bringing Sayuri the present she asked for.

Kanha tries to repeatedly convince Chiru to return back as the groom stepping out of the house after Haldi is a bad omen.

Chiru sticks to his plan and instead persuades Kanha to do everything he says.

The shoes brought for Chiru are a size smaller and keep hurting him.

Kanha exchanges his shoes with Chiru and they both run before anyone can spot them.

Kanha gets to the bike first and they leave.

Later, everyone is dancing as the band plays music loud and clear.

Anjali mentions Kanha's absence to Nakul, and, unaware of Kanha's present location, asks him how long it will take for Kanha to come down.

In the jewelry shop, Kahna keeps rushing Chiru and tells him that they must leave before Saroj finds out that they are missing.

Amongst all the ruckus, Chiru suddenly asks Kanha whether he will take care of Sayuri if Chiru were ever to not be present.

Kanha is taken aback by the sudden question and denies it initially.

Touching Chiru's feet, Kanha promises him that he will take complete care of Sayuri and he will also save her from Saroj.

The wedding rituals commence and Saroj and Indrani face one another.

Although there is resentment in their hearts, both Saroj and Indrani maintain smiles on their faces.

Nakul and Priya are sent to bring Chiru and Sayuri.

Although Sayuri reaches the mandap, Chiru is nowhere to be found.

Chiru takes control of the bike from Kanha and rides it faster than usual.

Here, Saroj and everyone is worried as Chiru is late.

© Copyright tellybest.com, 2022, 2023. All Rights Reserved. Unauthorized use and/or duplication of any material from tellybest.com without written permission is strictly prohibited.
Cached Saved on: Wednesday 25th of January 2023 06:43:50 PMCached Disp on: Monday 6th of February 2023 07:23:53 PM