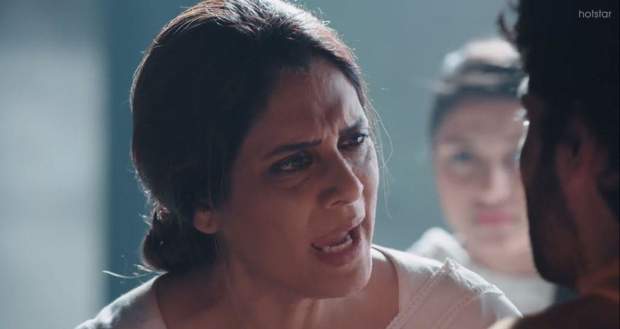 Rudraksh says that someone kidnapped him, he is missing for almost two weeks and he will register a complaint with the police.

Sharda asks how Rudraksh can kill Balraj as he used to love his father a lot but the police inspector says that fingerprints on the knife match the fingerprint of Rudraksh. Sharda cries while saying all proofs are against her son.

Preesha tells the Police to find Rudraksh as soon as possible to perform Balraj's last rites.

The police inspector informs Preesha to take Balraj's body as they are done with the Postmortem of Balraj. Preesha tells everyone and Mahima says that who is Preeta, she is not even a member of this house.

Sharda says that Rudraksh will not do the last rites of Balraj as he is a murderer.

Preesha tells Sharda to calm down as it is not proved yet that Rudraksh is the one who did this heinous act. Gopal and Yuvraj go for bringing the dead body of Balraj.

Constable tells the media that Balraj is dead, while everyone wonders who called the media.

Mahima is about to tell that Rudraksh is the one who murdered Balraj but Preesha stops her saying that it is not proven yet.

Mahima scolds her for stopping her while the police inspector says that Preesha is right as Rudraksh may hide himself learning about this.

Rudraksh enters the Khurana mansion and he gets shocked to learn about Balraj's death. He asks how and when did it happen while Sharda slaps him for murdering Balraj.

Rudraksh pleads to everyone that he was kidnapped, someone locked him in the room and he loves his father so much so why will he kill him.