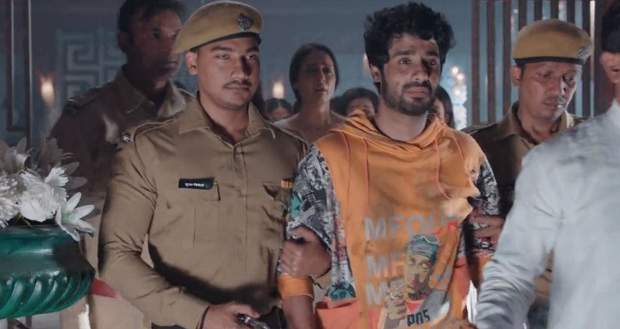 Rudraksh pleads everyone to trust him that he loves his father a lot and how he can kill his father.

Rudraksh says that he swears on Saransh that he can't do such a thing. Sharda tells that it was Saransh only who informed everyone that Rudraksh stabbed Balraj.

Rudraksh asks Saransh that there is a huge misunderstanding, he was not there for so many days then how can he do such a thing. Sharda says that Saransh never lies.

Rudraksh looks at Mahima and says that she is behind all this while the police drag and arrest him.

Rudraksh pleads to the police to let him do Balraj’s last rites. Sharda says that he doesn't deserve to do so, Saransh will do the last rites of his grandfather.

It forces Preesha to think if Rudraksh was not there then who was with them till then.

Rudraksh inquires Preesha that why she didn't stand for him and how can she believe that he was responsible for Balraj's death.

Preesha says that her heart doesn't believe this but all proofs are against him and he has changed a lot nowadays.

Sharda says that she will decide all the matters of the house by herself and asks Saransh whom he wants to stay with. Saransh says he wants to live with his mother Preesha.

Sharda says that Preesha will stay at Khurana's mansion for Saransh. Vasudha says that Sharda is right and Preesha agrees.