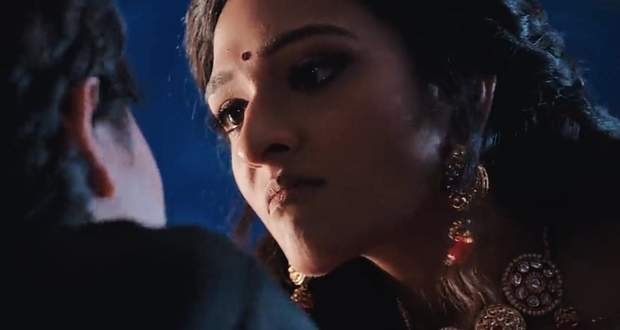 The interview starts and suddenly Saaransh introduces himself as Jr. Rudraksh Khurana and says that he will do the interview today.

Mahima feels humiliated while Saaransh does the interview with Chetna.

After the interview, Aahana and Mishika insult Mahima for being left alone by Rudraksh.

Mahima goes to Saaransh and locks the door.

She forcefully grabs him and asks him to tells her where is Rudraksh.

He says that he doesn't know after which Mahima takes out a belt from the closet and beats him with it.

Elsewhere, Preesha and Rudraksh plan to get the statement video to police the next day and he drops her off at her home.

Meanwhile, Mahima threatens Saaransh to not utter a word of the beating or else she will kill Rudraksh and Preesha.

She forcefully tells him to go to sleep while Rudraksh comes there and she acts sweet with him.

Next day, they are having breakfast while a servant comes there and announces the Rudraksh is in the shower and will be there shortly.

She gets angry seeing the video of Gautam and deletes it.

She wonders how she will delete the video from Preesha's phone and leaves hearing the bathroom door open.

Later, Preesha and Rudraksh go to the police to give evidence against Mahima but get shocked seeing that the video is missing from both of their phones.

© Copyright tellybest.com, 2020, 2021. All Rights Reserved. Unauthorized use and/or duplication of any material from tellybest.com without written permission is strictly prohibited.
Cached Saved on: Wednesday 14th of April 2021 05:42:17 AMCached Disp on: Thursday 15th of April 2021 10:18:31 PM