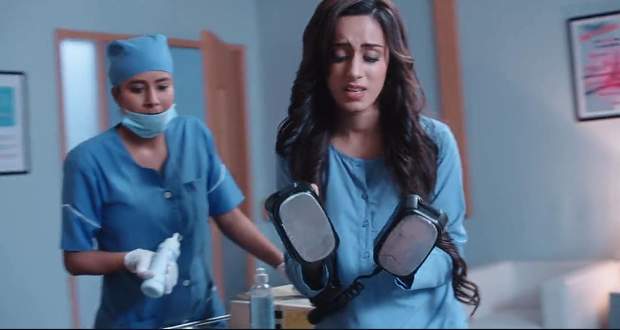 Today's Yeh Hai Chahatein (YHC) 14 Jan episode starts with Mahima telling Yuvraj to kill Gautam when he tells her that he is going to kill him tells her to keep his money ready.

Yuvraj goes while Mahima goes after him and he sees police stationed outside his room.

He tries to go inside but officers ask him for identity proof and he leaves from there by lying.

He bumps into Mahima who tells him that she will have to do it on her own and will do it on the same night.

Later, Sharda tries to get Saaransh to eat but he refuses saying that he will eat only after he talks to Preesha.

She calls Preesha and she asks him if there is anything while he remembers how Mahima beat him with a leather belt.

He is about to her but Mahima comes there and he changes the sentence in fear of her.

Sharda goes while Mahima again threatens Saaransh and tells to eat and go to sleep.

Mahima goes to the hospital and follows a nurse into the storage room.

She bribes her and the nurse gives her a nurse's uniform.

Elsewhere, Gautam regains consciousness and tells the nurse that he needs to talk to Preesha immediately.

The nurse leaves while Mahima enters his room plans to inject poison into him which will make it look like he had a heart attack when he suddenly awakes.

Mahima successfully injects the poison into Gautam and is about to leave when she bumps into Preesha.

Preesha doesn't recognise her and lets her go and gets a shock seeing Gautam having a heart attack.

The nurse comes back and says that the doctor is not present while Preesha tells the nurse to bring in the crash cart.

She manages to save Gautam while Mahima gets happy thinking that he died and gives Yug his money as he drops her home.

She goes to Saaransh's room and pretends to sleep beside Saaransh while Rudraksh comes there and check on her.

He tells Preesha on the call that Mahima is sleeping while Preesha tells him to come to the hospital.

© Copyright tellybest.com, 2020, 2021. All Rights Reserved. Unauthorized use and/or duplication of any material from tellybest.com without written permission is strictly prohibited.
Cached Saved on: Sunday 24th of January 2021 09:46:31 PM