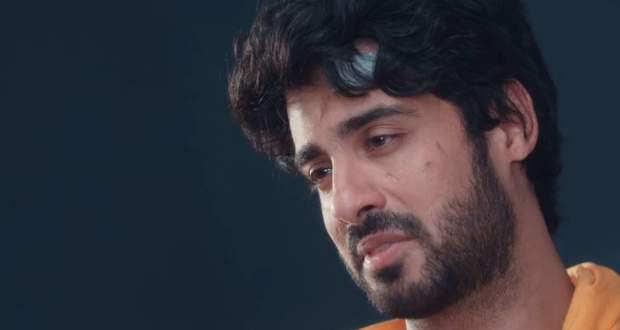 Mahima explains how Rudraksh needs to have crocodile injury marks like the one Bhuvan (the duplicate) has.

Mahima scolds Bhuvan for saving Preesha. She also says that he did a good job at getting Rudraksh's family against him. After the duplicate pushes Balraj, Balraj decides to change his will.

His money is now meant to be going to Saransh and also Mahima being the legal guardian will get all the money.

She is happy with her strong plotting against Rudraksh. They know that he won't be able to escape their evil planning.

Bhuvan is very happy living as "Rudraksh." He tells her how no one would even imagine getting plastic surgery. Mahima teaches him Rudraksh's body language.

While they discuss how they even fooled his parents, Balraj walks in. He threatens them both to call the police. Bhuvan ends up stabbing Balraj. Saransh sees the incident from a distance without the crafty duo noticing him.

Mahima then gets the duplicate to get Rudraksh's fingerprints on the murder weapon. He also goes to hide after it as per her orders.

All proofs are against Rudraksh and no one trusts Rudraksh but Preesha comes for him. Rudraksh helplessly shares his side of the story with her and cries into her arms.

Preesha gets an idea as her eyes fall onto his fake crocodile injury. She promises Rudraksh that she will get back to him soon and will rescue him.

© Copyright tellybest.com, 2020, 2021. All Rights Reserved. Unauthorized use and/or duplication of any material from tellybest.com without written permission is strictly prohibited.
Cached Saved on: Sunday 9th of May 2021 09:39:11 PM