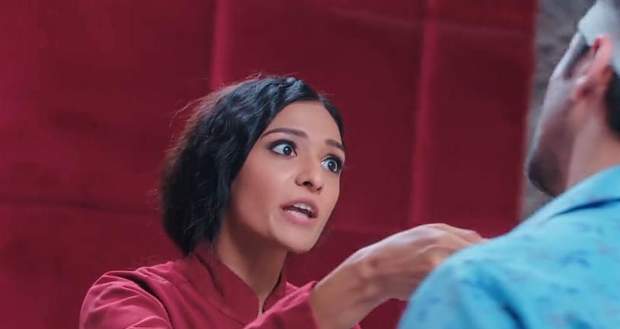 Rudraksh asks Gautam how did he get a heart attack when he reveals that it was Mahima who injected him with something and threatened to kill him if he gives evidence against her.

Gautam tells them that he is sure that the accident is also Mahima's doing while Rudraksh says that she was with him when the accident occurred and suspects that someone is working with her.

Rudraksh tells Gautam that he will have to be the bait to catch Mahima red-handed while he agrees.

Rudraksh reveals his plan and tells him that he will have to stay in a hotel.

Preesha gets a call and she loudly addresses the other person as Inspector and leaves while Mahima follows her.

Preesha purposefully reveals the details where Gautam has been shifted to knowing that Mahima is hearing her conversation.

Mahima plans to go to Gautam and leaves while Preesha tells Rudraskh on the call that their plan has worked.

Mahima goes to the hotel dressed as a guy and gets shocked seeing Rudraksh there.

She tells some of the girls that Rudraksh is here amd sends them towards him which distracts him as she goes inside.

Mahima goes to the servant's room and changes into a servant's outfit while wearing a mask.

She goes to Gautam's room and goes inside his room without his permission.

She puts a knife over his neck and is about to kill him while Preesha comes there and tells her that she will show the video to the police and will get her arrested.

However, Mahima tells her that she will kill Gautam if she doesn't delete the video and puts pressure on the knife.

Preesha deletes the video and Mahima releases Gautam and leaves throwing away the knife.

Preesha goes after her and tells her that she will expose her truth.

Preesha tells her that she knows all the men she conned and lists their names which shocks Mahima.